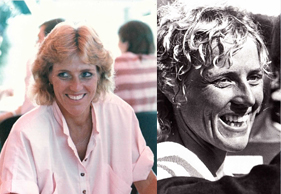 Helen was well into
her twenties and living in Pretoria when she started running to get fit in 1980,
and within six months the bug had well and truly bitten as she became a regular
at races. “Back then, there weren’t a lot of women running,” she says, “so I
stuck out like a sore thumb at events!” Those were also the days of Apartheid,
with South Africa unfortunately in political and sporting isolation, and thus the
Comrades Marathon was the focus for most local runners. So when Helen joined
the Harlequins and Phobians clubs and heard the seasoned runners talking about
training for Comrades, she soon got bitten by that bug as well. “I remember listening
to commentary of the race in 1980 and thought I could do it! I loved the vibe
and took it on the next year – so na?ve about everything.”

On her maiden Comrades run, she finished tenth woman
in 8:50, and followed that up with an 8:47 for 20th position in
1982, but then decided to focus on cross-country and shorter distances instead.
Helen steadily improved and by 1984 was ready to push for the ultras again,
going on to win the 1984 Two Oceans Marathon in 3:52 – then the women’s course record
– as well as the City2City Marathon in 3:26. Unsurprisingly, she was now considered a favourite for the
Comrades, and after relocating to Durban early in 1985, the idea of competing
in the Big C became a reality. “Road running was on the up, and living in
Durban, Comrades as a whole was such a dominant thing, so in 1985 I came back
and put a lot of expectation on myself – there was definitely a lot of
pressure.”

From the start of that
1985 Comrades, Helen was running neck and neck with the late Lindsay Weight,
who was chasing a hat trick of wins. They passed halfway together, but Helen
got the upper hand on Inchanga and eventually took the win in 6:53, with
Lindsay second in 7:01. Interestingly, she puts that win down to good fortune.
“The split between the top ladies and men is so close, sometimes it’s all about
who is luckier on the day. I remember I was in complete agony at the finish! I
was just relieved that I made it, because I had put a lot on the race that year
and I expected to do really well.”

That rivalry continued in
1986’s Down Run. Trailing Lindsay in the first half, Helen picked up the pace
and went through Drummond in the lead as Lindsay fell off the pace, and she went
on to win her second title in 6:55, a comfortable 12 minutes ahead of runner-up
Ralie Smit. The next year, Helen completed her hat-trick by winning in 6:48, once
again just ahead of Lindsay. A year later, with Helen still at the top of her
game, it needed a very special performance from Frith van der Merwe to end her
winning streak, and Helen had to settle for third, then was 16th in
1989. “Frith then was more talented and my interest in Comrades waned from
there,” says Helen. “I knew I needed a break and more of a balance in my life,
so I went back to focus on marathons and shorter stuff to concentrate on
cutting off some of my times.”

Helen would run Comrades
another three times, failing to finish in 1991 and 1994, but then making a
remarkable comeback to finish 16th woman in 1995, a whole 14 years
after her first Comrades. After that she turned her hand to commentary and for
15 years was a regular on SABC TV and radio, covering the Comrades and other
road running events, and taking the pressure of live broadcasts in her stride.
“I think running helped me in that line. It definitely helps a person’s
character and attitude – it’s never purely physical. It’s about managing the
difficult situations and overcoming. As long as you work hard and power
through, it works out.”

Today Helen is kept quite
busy managing her own Specialist Recruitment and HR Services company in Durban,
but remains an active runner, having found a new love for trail running. She
runs 8 to 10km a day on the beach, and swims in the sea and does Pilates to mix
it up. She is also an outspoken advocate of the annual Spar Ladies series of races
and loves to see the growth of women’s running and the development of talented female
runners. “Running today has picked up, and people are realising that they can
take on 10km and be fit without needing to look at the ultras,” she says. “Running
is definitely more global and there is an outdoor culture, so it is wonderful
to see more and more runners coming to those events!”