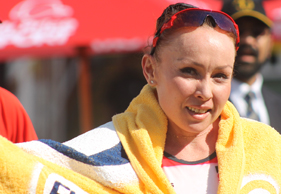 When
Claude Moshiywa took the lead in the 2013 Comrades Marathon shortly after
halfway, the contest for first place was effectively over. Granted, he was
reduced to a walk on Polly Shortts, but with a lead of over seven minutes, he always
looked set to win. Meanwhile, the Nurgalieva twins once again claimed the top
two women’s positions, with Elena recording her eighth win at Comrades, now just
one behind the all-time record of Bruce Fordyce. No surprise then that some
said it was a fairly undramatic race…

However,
with the brutal heat and headwind that the runners had to endure much of the
way, it was far from undramatic behind the leaders! Some 4000 starters did not
make it to the finish, and amongst the 10 000-plus runners who did make it
home within the 12-hour cut-off were many runners who had dug very deep to get
to Pietermaritzburg. Amongst them were Alan Robb and Dave Lowe, both running their
40th consecutive Comrades to increase the number of ‘Quadruple
Greens’ to eight. Unfortunately, David Williams was unable to do likewise. Meanwhile,
Dave Rogers quietly pushed his medal tally up to 45, three more than anybody
else has managed.

Modern Athlete had three pacesetters in
action during Comrades 2013, with two coming home on target and the third
having one of those days…

We pacers had a job to do and I think everyone
played their part. Vlam was incredible, doing most of the work, most of the
way. I am just glad for the opportunity to have taken the runners home. I love
what I’m doing and hope to continue pacing for a few more years if the
opportunity is there.

This
was certainly one of the worst days of running I have ever experienced. I
started off well, and we were about three minutes ahead of plan at Drummond. I
was feeling really good up to about 55km, when I suddenly felt nauseous and
dizzy. I chatted with some of the guys running with me, and an athlete from
Eskom agreed to take the flag. I believe he ran with it to the end, coming in
about 9:55. I was dizzy for the rest of the day, even passing out on the side
of the road. I don’t know what went wrong – I did everything I normally do on
race day. Guess it was just one of those days.

This
was my third time pacing at Comrades, and I faced all the same questions: “What
is your plan for the race, what is our halfway target time, which hill is this,
when is the next walk?” You cannot tell runners that nobody is sure of anything
in this race, so you just keep their spirits high. And so we reached halfway
exactly on time, 5:25, but when we reached the top of Inchanga, the heat was
the worst I have experienced in 12 years at Comrades, with the strong wind
making it worse.

I
looked around and could see the runners around me were not having it easy. Sometimes
it is hard for us pacesetters, as well. On more than one occasion, I felt like
taking out the flag and telling them, “Sorry, go on your own.” But then that
question is asked again: “Will we make it?” So you pick yourself up and keep on
going. The best is always when you cross the finish line, with people hugging
you, saying thank you with tears running down their faces.

Best Seat
in the House

Taking a
seat on the media truck at Comrades 2013 was a privilege: I got to see the dash
from the start in Durban, Claude Moshiywa’s walk-run shuffle up Polly Shortts,
and the tears and smiles of thousands at the finish line. – BY LAUREN VAN DER VYVER

After
running, the second-best place to be on Comrades race day is on the media truck
– this was my second year covering the front of the race – and there is nothing
more exciting than the Comrades start! I’ve also learnt that Comrades holds a
mystery each year: Despite the continuous build-up, there will always be the
underdogs who come to the fore and the unexpected happenings that will write
the headlines. Like who knew that Nedbank’s Claude Moshiywa, who also holds
down a ‘normal’ 9-to-5 job, would grab such an emphatic victory? At Comrades, anything can happen.

As
Durban disappeared, the crowds gathered and little boys sprinted alongside the
leading men. Up Inchanga, Claude ran beside Johannes Kekana and they shared a
packet of water, grappling with the stinging heat. On the truck, we heard the
Nurgalieva twins were leading comfortably in the women’s race, with SA’s Charne
Bosman close behind. Then at Polly’s, Claude slowed to a walk, with the
journalists urging him on. He recovered and the last 7km dash ensued so the
media could grab a good spot at the finish.

For
the next seven hours until the final cut-off, my camera was out to capture gasping
finishers hugging strangers, team mates embracing with relief, and the
first-timers who seemed dazed that they had actually made it. For Claude, Elena
and the runner who stumbled in at 11:59 alike, this is a special race to be
part of. For a young journalist, I doubt anything can compare.

I
had always thought the Comrades Marathon is a race for the mentally deranged,
so when I was asked to go down to work in the Modern Athlete Smile Zone
vibe spot on the route, I was in two minds. One was curiosity, the other was
wondering if I would actually enjoy this. –
BY NICOLE DE VILLIERS

To
my surprise, I was as excited as a kid on Christmas Day as we set up our vibe spot
4km from the finish, but the waiting for the frontrunners was torture. Finally
the flashing lights from the cop cars came steadily over the hill and we saw
Claude Moshiywa in the lead. I can’t remember the last time I had felt such
heart-pumping adrenalin!

As
the crowd thickened, the heat grew more intense, but we kept on cheering for
hours. The hardest thing to see was when the masses of athletes towards the end
realised they weren’t going to make the cut-off time of 12 hours. Then our vibe
spot became a war zone, with some athletes lying next the road. I stayed with
one who was suffering from severe dehydration and was in desperate need of an
ambulance. I had to hold the tears back, but it was all worth it when he got
hold of me the next day to thank me for staying by his side.

I
now think of Comrades differently. It is a life-changing experience for those
who dare to take on the gruelling challenge, and it was an absolute privilege
to be a part of this extraordinary race.