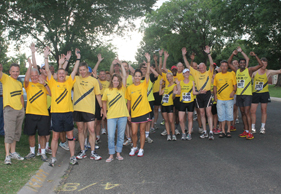 Mention
the Wright Brothers and most people will think of Orville and Wilbur Wright,
the American brothers who were the first to fly in an aircraft, way back in
1903… but when it comes to the Rand Road Warriors club, the Wright Brothers can
only mean Eric, Fred and Les Wright. These ultra-long distance specialists have
not only completed numerous Washie 100 Milers between them, but also excelled
at this gruelling event. Eric has completed 24 Washies, including winning one,
and he also has 31 Comrades finishes to his name. He was recently selected to
represent the SA team in the World Six-day Championships
to be held in Hungary next year. Meanwhile, Fred has run 13 Washies and 29
Comrades, while Les has run 12 Washies, placing second three times, and
completed Comrades 24 times. Another ultra star in the club is John Magagane,
who has completed 10 Washies and won three!

However,
while some of the members are totally focused on these ultra distances, there
are just as many Warriors who prefer shorter distances, including walkers and
juniors, and they are always encouraged to join in club events and races, while
a number of members now concentrate on trail running events. The perfect day for
all these groups to mix it up is at the club’s Thursday evening time trials,
with a route that is flat and fast, and known to be a true test of pace. And
then it’s time for a club get-together in the clubhouse, a multi-storey
building in the middle of a picturesque meadow in Beverley Road. “The roof
leaks like hell when it rains and the light in the men’s loo never works, not
to mention the door never closes, but we are always filled with a great spirit
concerning our sport,” says club chairman Bernard Andersen.

The
Rand Road Warriors club dates back to January 1989, with Vernon Cloete appointed
as the club’s first chairman and a starting membership of 48 runners, of which
an impressive 23 entered for Comrades that year. The club’s focus on the Big C (and
other long distance races) has grown over the years, and this year the club brought
home three silver medals, eight Bill Rowans, 27 Bronze and 26 Vic Clapham
medals.

Today
the club has 210 members and puts a lot of emphasis on family participation.
“Ours is a family orientated club and most of our club functions and events are
focused on family participation,” says Bernard. “For example, every year we
hold the Barry Hadden Memorial Run where the club members and family gather at
our time trial venue and we run laps, as many as each person wants to or can. Afterwards
we have a braai with Barry’s family.”

Morning
group runs take place from Tuesday to Friday, starting from the Karaglen Virgin
Active. There is a notice board where members are notified of what the schedule
is for the following week, and runners can expect numerous routes mixed up with
hill and speed training to keep things interesting. “We also have a Saturday
morning run, which is very social and relaxed, and it is always named after the
person who organises the run,” says Bernard. And then once a month members
attend a ‘book club’ with a difference: “This is when we meet to discuss the
training programme for the following month and where runners can get hints and
tips from more experienced athletes.”

REACH FOR A DREAM

The
club has successfully hosted the Remax Marathon for the last 10 years, but a
route change last year coupled with a new race sponsor for 2013, the Sarens
group, has seen some changes to the race, which will take place on 10 March,
with the start and finish at Edenvale High School. If you’re in the Gauteng
area for this one, put on your racing shoes, because the course promises to be fast
and flat.

The
club has been closely involved with the Reach for a Dream Foundation, a charity
that gives children who have been diagnosed with a life-threatening illness a
chance to achieve one of their dreams, normally something they would not be
able to do due to their illness. “We call on families to join us in making a
difference in the life of someone who needs it, and the proceeds of our Sarens
Edenvale Marathon will go to the Foundation, so please keep 10 March 2013
open,” says Bernard.