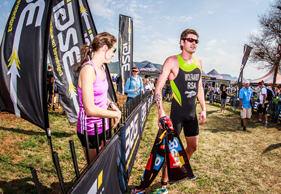 I got to
the start with mixed emotions: I was excited to be doing my first triathlon and
to be taking part in the ever-popular BSG Triseries event, but my excitement
was dampened by the overcast weather and the chill in the air, added to the
fact that my ‘tri buddy’ had phoned in sick the night before. But as I got out
of my car, the vibe at the event lifted my spirits and I soon felt part of
something new and exciting.

For a
newbie like me, I found the whole registration process well organised and
before I knew it I was lining up for the swim amongst the mass of colour-coded
swimming caps. I must admit though that I had made the mistake of thinking I
could just train in a swimming pool for an open water swim! So, as the gun went
off and I started swimming, the pitch-blackness of the water hit me. I battled
to swim with a proper technique, my breathing became difficult, and I ended up
swimming breaststroke. I was literally the last person out of the water… if you
don’t count the rescue team!

Being
primarily a cyclist, I got to my bike thinking I could make up lost time,
despite the bike leg having been extended from 20km to 27km. The ride was
exhilarating, with the course having just enough hills and flats to make it
enjoyable. The wind made some parts tough, but by the end I was feeling good,
and I only had 5km left to run. And what is 5km, right?

I
was ready to take off at a pace of 5min/km, but was completely shocked at how
my body could not react. So instead of racing to the finish, I plodded
breathlessly on a course that seemed to take forever. As I finished, I felt
like I deserved five medals, despite my terrible finishing time!

I
learnt that a 600m swim is short, a 27km bike ride is not much of a challenge, and
a 5km run is easy – but add them together… now that’s a different story! Still,
I will be back to take on the last leg of the BSG Series at Emerald Casino in
Vanderbijlpark on 2 December.