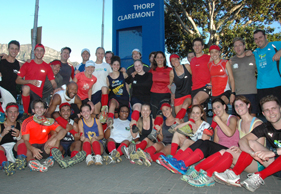 Go for an
early morning run on a Friday and chances are you’ll bump into a group of
runners in funky knee-length red socks, chatting away and greeting everybody
with a boisterous “ShoOops!” as they merrily make their way down the road or
trail. These are the proud members of the ‘I Wear Red Socks on Fridays’ social
movement, which has developed into an unofficial global running club of sorts,
all from a simple gesture of friendship by John McInroy, a 31-year-old South
African entrepreneur.

He says the
first Friday morning Red Sock Run took place in Newlands, Cape Town, with eight
runners joining in. A week later there were 33 runners. Then, as word of mouth
spread and pics appeared on Facebook and Twitter, John started receiving mails
from people all over, asking if they could start their own Friday Red Sock Run.
“It was totally unstructured, just taken on by people with passion, and I now
know of nearly 30 regular Friday morning groups all over the world. Every now
and then I hear of another one starting in the USA or UK,” says John.

“I try to join
as many as I can and love meeting all the Red Sockers, like the crazy, but
incredible Edgemead group here in Cape Town: 50 people running at 5:30am, with a
guy on a loudhailer, everybody ShoOopsing amongst the houses. What I love is
that it is not restricted to running. Whether you run, walk, hop, or just join
for a post-run coffee and chat, everybody is welcome. It doesn’t matter if you’re
tall, short, white, black, etc., it’s all about getting people to follow their
hearts and live out their passion. And if there isn’t a Red Sock Run in your
area, you can start one!”

MAN WITH THE PLAN

John was
born in Cape Town, lived in the UK aged four to 16, then came back to SA to
finish school before doing a B.Comm at UCT. While at varsity, he was picked for
the SA men’s hockey team, alongside his great friend from UCT, Ian Symons, and
after completing varsity he played two seasons of pro hockey in Bordeaux,
France. A short while later John found himself in Ireland, and that’s where the
Red Sock idea was born in 2007.

“After
university and hockey, my first job was for an Irish property developer in Cape
Town, and then I was transferred to Dublin, where Ian was working as a doctor,”
says John. “I had read about Sidney Feinson, a South African soldier who made a
pact with two friends in an Italian prisoner of war camp during the Second
World War, where they promised each other that should they make it back from
the war alive, they would wear red socks to remember each other. So Ian and I
started wearing red socks too, as a mark of our friendship, and decided to always
do it on Fridays – because it seemed a good day to do it. Soon our colleagues
and friends also picked up on the idea, and because times were economically
tough in Dublin then, the red socks seemed to brighten up people’s lives. It
just spread from there.”

As the Red
Sock movement gained momentum, so did John’s plans to spread the goodwill. “One
day I woke up after dreaming of the whole world wearing red socks, including US
President Barrack Obama pulling up his pants while addressing a crowd and
saying ShoOops!” So, John applied to do an MBA at the University College of
Dublin, even though he couldn’t afford it, and things just worked out for him.
“I received a 15 000 Euro scholarship for my entrepreneurial idea for ShoOops Red
Socks, and the university’s sport department approached me to become head coach
of hockey, which paid for the other half of my studies. I was getting a free MBA
plus pocket money, so I decided I must be doing the right thing!”

Upon
completing his MBA and returning to SA, John’s vision was to sell the socks and
donate most of the proceeds to charity, but admits he had no clear plan as yet –
and running was not even on the radar. “Then Ron Rutland of the Bobs For Good Foundation
sent me an invite to run the Sani Stagger Marathon in November 2010. I ran in
my red speedo and red socks, and finished almost last, just a few minutes
before the six-hour cut-off, but I had never felt so proud of taking part in
anything!”

“A month
later, WP van Zyl came into my life. He told me about Phil Masterton-Smith, the
youngest ever winner of the Comrades Marathon in 1931, who couldn’t afford to
travel to the race in 1933, so cycled from Cape Town to Pietermaritzburg over
10 days, then ran the race on the 11th day and still finished tenth!
He was known as Unogwaja, which is Zulu for The Hare, and the moment WP shared the
story with me, I said we’re doing the Unogwaja Challenge!”

Unsurprisingly,
some people said John was crazy. After all, it was just five months till
Comrades 2011, he had only just run his first marathon, and he didn’t even own
a bike at the time, let alone know how to cleat his feet into the pedals, but sponsors
like KTM bikes immediately came on board, and John and his fellow riders duly
finished the ride-run. Now in 2013, John has just finished the challenge for a
third time, alongside 11 carefully selected fellow biker-runners, all
completing the challenge in their red socks and raising nearly half a million
Rand for charity in the process. “It was scary how many people told us in the
first five hours of Comrades that we wouldn’t make it, because of the energy we
were wasting on shouting, jumping, hugging and ShoOopsing, but the ‘Red Love
Train’ made it!”

FOR A GOOD CAUSE

John explains
that running in red socks is more than just about friendship and fun, or a
physical challenge, it is also to support worthy causes. “Thus far we’ve sent
about 30 000 pairs of socks to 60 countries, with the largest
concentration here in South Africa, and in the last three years we’ve raised
nearly a million Rand for charity, so it is working. Some people even wear them
every day, and due to the demand, I’ve had to hire an administrative assistant,
Jean, who has quickly become known as ‘Mrs Red Socks.’ Things have been quite
unstructured thus far, but going forward we will sell the socks at R50 for the
long ones and R40 for the short ones, with some of the money covering the
manufacturing process and our administrative costs, and the rest going to charity.
We’re also giving socks to charities to sell themselves, so they can keep the
profits and benefit even more.”

“You can’t
buy the socks in shops, but just from word of mouth it keeps growing. Maybe one
day there will be a million red socks out there, but it’s not about numbers of
socks, it’s about the incredible stories that have come out of it. For me, the Red
Socks epitomise how a small group of people can make a difference, by living
life to the full, following their hearts, giving back and inspiring others to
do the same. It’s an attitude to life.”

There are now Friday morning Red Sock Runs all over the world, including
South Africa, several European countries, the USA, Canada, Australia, even India…
It’s all about passionate people sharing the road while supporting a great
cause. Here are just a few of the many Red Sock Runs around SA.

Start your own Red Sock
Run

Every running club, training group, gym class, company, school or group
of friends can start its own Red Sock Run. All it takes is some runners or
walkers, red socks for all, a meeting place and time, and you’re set. Oh, and
plenty of energy, laughter and conversation, because that is what Red Sock Runs
are all about. To get started, simply contact John to order your socks and then
tell everybody you know to be there!