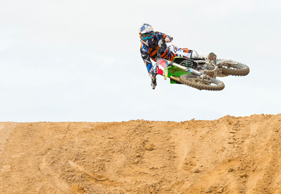 When Anthony
was nine years old, some family friends invited him to ride their bike and he
was hooked. After begging his dad for his own bike, Anthony started to compete
at age 11 and eventually got signed to a professional team at age 16. Today he
is experienced in both MX1 and MX2 class racing, with MX1 using a 450cc
motorbike, while MX2 is raced on a smaller 250cc bike.

In 2009, he
was chosen to represent
at the African Motorcycle Union Champs in , where he finished second
overall in the MX2 class, and later that year he earned his SA colours. “Then
in 2011, I competed for South Africa in the Coupe de L’Avenir in Belgium. It’s
pretty much the Olympics of the sport, and I was team captain, so it was an
honour, and I grew into myself,” says Anthony. He grabbed a ninth place finish
in ,
and that spurred him on take first place in the MX2 SA national champs in 2012.

TRAINING FOR THE TRACK

On the
global stage, Anthony mostly rides in the MX2 class, where the race tracks are
normally longer than local tracks, but he says either class requires great
physical fitness. “People don’t think motocross athletes need to be that fit,
but we need to! We spend about 25 minutes at a time on the track during a race
and it never stays the same! People don’t realise we handle a heavy bike in
sand, soil and clay. When you’re lifting a 110kg bike and jumping 30m in the
air, you need fitness and strength. Nobody really thinks about that!”

Therefore,
between track sessions three to four times a week, Anthony prioritises trail
runs around the Blouberg area where he stays in . “I usually run 12km a day, but cut
it to 6km before a big race. I also cycle around 80km, or three hours, to mix
it up,” says Anthony, who also swims at gym to get an overall base fitness, and
uses several cross-fit exercises to work on his strength.

Anthony has
studied personal training and sports science, so knows that a balance of
exercise and good nutrition can only help him on the bike. “I eat healthy and
train hard, and I know what to put into my body to see results,” he says. “I
have no doubt that motocross athletes are the fittest out there!” He also
believes that his best results on the bike came after he focused on his cardio
work.

He is
eyeing another national title this year and wants to compete at the British
Champs, where he hopes he can grab a top 10 finish. While his family and
friends worry about the risks that come with the sport, they support his career
and often come to support him at races. “I’ve hurt my collarbone and broken my
index finger, but nothing serious over the years. There have been some
concussions along the way, but that comes with the sport.” he says. “You have
to practise to perfect it. Quitters never win, and winners never quit!”