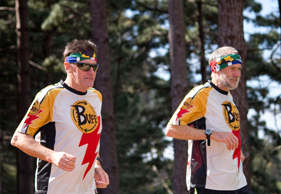 At 4350km, the
Mekong is the world’s 13th longest river. It rises in Qinghai Province
of China, where it is known as the Lancang River, and flows south-east through
Tibet, then through Yunnan Province. After leaving China, It becomes known as
the Mekong and flows southwest to form the border of Myanmar (Burma) and Laos
for 100 kilometres, then turns southeast to form much of the Laos-Thailand
border, before crossing through Cambodia into Vietnam, where it spreads out
through various distributaries to form the massive Mekong Delta that empties into
the South China Sea.

“We originally planned to run a source-to-sea route, starting in China,
but when the Chinese government recently announced that Tibet will be closed to
tourists until further notice, we faced a 600km detour around Tibet, so rather
opted to skip the Lancang River section and start where the river becomes known
as the Mekong,” says David. “We will run as
close as possible to the river at all times, taking into account the need to
run on a de-mined route – there are still thousands of mines in the area left
over from the Vietnam War. A support crew will accompany us in a four-wheel
drive vehicle, but where the route makes this support impossible, we will run
self-sufficient with backpacks.”

Given the nature of the route David and Mark will
follow, this will arguably be one of the most gruelling ultra trail runs ever
undertaken, but both runners are seasoned long distance athletes, with many
marathon, ultra and stage races finishes between them, and they averaged 250km
per week in training in the build-up to their run, so they’re quietly confident
of success. They’re also highly motivated to complete the challenge, as they
are running for the Endurance Challenge Charity Trust (ECCT), which David
founded in 2007 to use his running to raise funds for various children’s
charities in South Africa.

“The Mekong River Run will
allow me to combine my love of ultra-distance running with an abiding passion
for answering the call to make a difference,” says David. “I am dedicating this
challenge to Home from Home, whose members exemplify the spirit of charity in
their commitment to caring for orphaned children who are innocent victims of
the HIV/Aids pandemic.” Home from Home sets
up and runs small, community-based, family foster homes with up to six children
cared for by foster parents. They are currently running 26 homes caring for
around 170 children, and many more homes are in the planning stages.

Mark adds, “I decided to join David in this challenge
because I identified it as a once in a lifetime experience to raise mega funds
for the wonderful organisation Home from Home, and I was also concerned for his
safety doing it alone.” (Besides monsoon rains, landslides, landmines and
renegade army troops that like to kidnap foreigners for ransom, David is also
as a recent cancer survivor and underwent a bone marrow transplant less than a
year ago, so Mark will keep an eye on his health through the challenge.)

You can follow David and Mark’s progress and support
their effort at www.mekongriverrun.com.