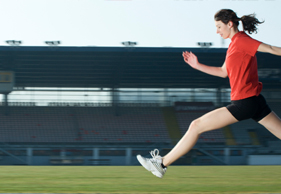 There’s an old saying about something being just a
hop, skip and a jump away, and that appropriately sums up the benefits of
plyometric training, because with simple hopping, skipping,
and jumping drills, you can improve running economy, lower-body flexibility and
stride length, in addition to strengthening all lower-body muscles, tendons,
and ligaments. Plyometrics teaches the proprioceptors of your muscles and
joints – the internal receptors that enable coordinated movement and balance – to
push off the ground with greater force, by recruiting fast-twitch muscle fibres
more efficiently. In other words, plyometric training puts more spring in every
step you take, which is the key to better running.

Perhaps
the best thing about plyometric training is that while it can help you run faster
times and improve your endurance, it doesn’t add much time to your training
routine. Just one or two quick sessions a week will do the trick, and those
sessions should only take a few minutes. For most plyometric drills, you only
need a few metres of space on a flat, stable surface that provides a bit of
give, like grass, an athletics track or a cushioned gym studio floor. And as another
old saying goes, jump in with both feet, because giving maximum effort will see
you become a stronger, faster runner.

WHEN I SAY JUMP…

John Cissik, co-author of Sport Speed and Agility, recommends
beginning your plyometric training with the following three drills, once or
twice a week.

1. Vertical Jump: Stand
with both feet hip-width apart and place your hands on your hips. Tilt your
hips back, bend your knees, and leap straight up as high as you can. Land with
both feet flat in the same spot. Make sure you bend your knees to absorb the
impact.

?
Reps: Begin with one set of 10 jumps in rapid
succession. As you get stronger, build up to three sets, with each set
separated by a one-minute rest.

?
Strengthens: All of the muscles, tendons, and ligaments
from the waist down.

2. Split Jump: Place one foot a step ahead of your centre of
gravity and the other foot two to three steps behind your centre of gravity,
with your knees slightly bent and hands on your hips. The front foot should be
flat and your rear heel should be off the ground. Tilt your hips back and jump
as high as you can while maintaining your leg positioning. Land in the same
spot, allowing your bent knees to absorb the impact.

?
Reps: One set of three to five jumps. Build up to three
sets with one-minute rests between.

3. Ankle Hops: With feet hip-width apart, balance on the
balls of your feet, with heels elevated. Bend your knees, place hands on hips,
and repeatedly hop forward, pushing off and landing only on the balls of both
feet. Stay on the ground as little time as possible between hops and never let
your heels touch the ground.

?
Reps: Start by hopping 10 metres. Build up to 20
metres, then add a second and third series of hop sequences with one-minute
rests between them.

?
Strengthens: Everything below the knee, but especially
Achilles tendons, shins, calves, and the flexors that support the ankles.

The
bottom line is that just running long slow mileage in training each week will
get you fit, but not do much for your speed, whereas adding plyometric drills
will improve muscle power, which will mean faster race times.