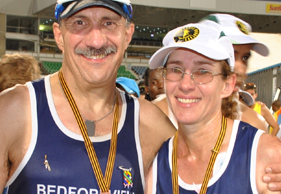 While
climbing the corporate ladder, smoking heavily and enjoying more than 10 beers
at a time, Willem Anderson knew he had become overweight, but he never really
cared. After all, the chartered accountant was happily married to Gay, the
father of two great boys, and was slowly building a bright future for his
family. So, without any guilt, he could easily tuck into numerous large meals
before topping it off with some chocolates, take-outs and at least two litres
of Coke daily.

Though
he was a keen athlete at school, until a motorbike accident stopped him
competing, over the years the weight slowly crept up on him – to the extent
that in September 2006 Willem tipped the scale at his heaviest: 144kg. He
battled to sleep at night and sometimes even stopped breathing before waking,
gasping for air. He could barely fit into any decent clothes, had not exercised
since his schooldays, and basically lived only to work.

In
August 2003 Willem’s father passed away and this was his first wake-up call to
start losing weight, especially as his father had complained a lot about his
son’s weight problem. “His death shocked me and I was feeling terrible,” says
Willem. “My feet and ankles were always swollen and I would literally watch TV
for about 20 minutes before falling asleep.” So Willem applied some basic
healthy eating principles and lost 35kg. “However, I did not do any exercise,
was still a workaholic, wad still drinking too much, and was still smoking more
than 30 cigarettes a day.”

The
biggest change came when after he landed up in hospital. “My wife got home with
my favourite food, pie and chips, but I could not even face it. I had terrible
chest pains and asked her to take me to hospital, where they tested me for a
possible heart attack. While lying there with al the ECG cables and monitors, I
saw my boys looking completely lost and staring at me in total shock. I said to
my wife I can’t die now, my sons need me.”

While
in hospital, Willem had to run on a treadmill as part of a stress test, and
strangely enough, he says, that was what awakened his desire to exercise again.
“I felt so good after that run on the treadmill that I decided there and then
to buy a treadmill.” With all the tests done, Willem was diagnosed with a gall
bladder attack and told to lose at least 35kg before he could be operated on to
remove his gall bladder and fix a hernia. On the same day of his discharge, he
bought a blood pressure monitor and scale. He also saw a dietician briefly
while in hospital and she gave him some guidelines to healthy eating that he
still applies today. Back home, he was a changed man, sticking to a strict and
healthy eating plan. “My motivation came from losing weight each week,” he
says.

The
first time Willem attempted to do any form of exercise since school was in
2006. He started out by walking 2km, which took him 30 minutes to cover. Over
the next few months he slowly built up, and in July 2007 Willem and Gay ran
their first 15km road race together. “We were so inexperienced. I was
completely overdressed and did not even know what an energy gel was when it was
handed to me. But when we reached the finish line, I sobbed like a baby! It
certainly was one of the most joyous moments of my life.”

Three
months later Willem stopped smoking and from there his health kept on improving
– the rest, as they say, is history! In 2007 the 94.7 Cycle Challenge came
along and though an inexperienced cyclist, Willem decided to tackle it. His
first half marathon followed in January 2008, before he set his heart on the
big mamma of running, the Comrades Marathon. “I knew that I was eventually
going to run Comrades, and after we watched from the sidelines in 2008, I
decided it was time. My first Comrades in 2009 with my wife by my side was
magic!” Since then the couple have crossed the line three more times.

In
2010 Willem climbed Kilimanjaro with Gay, who had always dreamt of doing it.
“It was unbelievable and by far the greatest emotional experience.” Then in
2011 it was time for a different type of challenge as Willem completed his
first Half Ironman race, before moving on to full Ironman in 2012, the year in
which racing conditions were the worst in years. “I have never been so scared
in my life before a race, but crossing that finish line was the ultimate for
me. I still look back at it and wonder how I did it.”

Willem
now weighs in at 82kg, while his lowest recorded weight was 73.7kg on 3 October
2007 – just over half his top-end weight of 144kg in 2003! He now eats healthily
by following a sensible eating programme and believes in making healthy food
choices rather than resorting to so called diets. Apart from finishing numerous
cycling races, Willem has also run six ultra-marathons, 21 marathons and 74
half marathons, plus finished six Olympic-distance triathlons to go with his
Ironman medals. And still he has numerous challenges left on his bucket list!
He adds that he still looks at himself in the mirror today and can’t believe
how he has changed. “I would have been dead by now if I
had not changed my life. There is no doubt in my mind.”