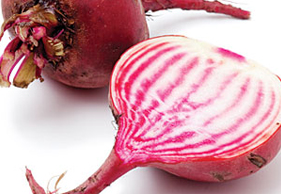 Beetroot juice and its potential athletic performance
benefits has been a hot topic of late. It started after a University of Exeter study
in 2009, and published in the Journal of
Applied Physiology, reported that regular consumption of beet juice may
boost athletic performance, increasing endurance while lowering blood pressure
and reducing fatigue. Although there has been some conflicting research about
this topic, a recent study by researchers at Saint Louis University, published
in the April 2012 issue of the Journal of the Academy of Nutrition and
Dietetics, shows that eating cooked beets “acutely improves running
performance.”

For this latest study, the researchers tested 11
“moderately fit” runners as they ran a pair of 5km races on a treadmill. Before
one race, they gave volunteers a placebo; before the other, they gave them a
200g serving of baked beets (which contains approximately 500mg of nitrates). After
eating beets, the runners went an average of 3% faster and shaved 41 seconds
off their times. And their biggest speed gains came over the final 2km of the
race. According to the study, 200g of baked beetroot, or an equivalent nitrate dose from other vegetables,
should be consumed 60 minutes before exercise so the magic can kick in!

There are a number of potential benefits from eating
beet or drinking beetroot juice:

?
More oxygen for your
muscles: Beetroot is rich in substances called nitrates, which are
converted into nitric oxide by the body. The nitric oxide dilates blood vessels,
which results in improved oxygen delivery to the muscles and essentially makes
the hard efforts easier. For example, one study found that a cyclists’
endurance can be boosted by 16% by nitrates. Nitrates can be found in other
vegetables as well, including radishes, lettuce, celery, parsley, Chinese
cabbage and endive.

?
Cardiovascular benefits:
Athletes aren’t the only ones that benefit from
nitrates. Elderly people and those with lung, heart and metabolic disease could
also benefit from the increased oxygen that nitrates supply to the body. In the
Exeter study, scientists found that those who ingested nitrates also had a
lower resting blood pressure, because the juice dilates blood vessels.

?
Improved hydration: Beet juice is also beneficial for an athlete’s hydration. Maintaining
electrolytes is challenging, especially when athletes compete in the heat, but
beet juice is high in potassium, which can help regulate fluid levels and
balance electrolytes.

?
Natural anti-inflammatory: Beet juice is
also an effective anti-inflammatory because it contains betanin. Therefore, a
relatively low daily intake of 300ml (one and a quarter cups) of red beet juice
has been suggested to be enough to reverse the effects of free radical damage and
oxidative stress in humans. Medical researchers are now optimistically suggesting
that beets and beet juice may be a useful healing therapy for a variety of
degenerative diseases and can reduce an athlete’s risk of chronic inflammation
and illness.

?
Essential Vitamins: Beet and beet juice
are also rich in vitamins C, A, B1, B2 and B6.

To make your own beet
power-snack, place about 200g of beetroot on a baking sheet and bake at 350
degrees for 90 minutes or so. Peel off the skin, then put the remaining
beetroot in a food processor. Add a tablespoon of lemon juice, 1/8 teaspoon of
cinnamon, and 1/8 teaspoon of nutmeg to make it more palatable, and blend. Then
eat it about two to three hours before an event to get the maximum athletic
affect.