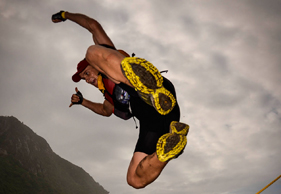 In just four years, The Otter Africa Trail Run has become a revered ‘bucket list’ must-do
for SA trail runners, and is now even called the Grail of Trail, as the
stupendously scenic five-day Otter Hiking Trail in the Tsitsikamma section of the Garden Route
National Park is normally only open to
a small number of hikers – and totally off-limits to runners! This
marathon-length trail run has traditionally been run ‘down’ the coast from
Storms River Mouth to Nature’s Valley, but this year saw the first ‘up’ run,
unsurprisingly dubbed the RETTO.

The Otter has two separate
events, catering for the competitive runners (The Run, 8-hour cut-off) and
social runners (The Challenge, 11-hour cut-off). Each event has a 5km prologue
the day before to determine the start order. The ‘up’ route’s key spots include
the challenging Bloukrans River crossing, as well as a series of steep ascents
from the halfway mark, especially between Scott Hut and Ngubu Hut, some of
which climb over 100m in vertical gain in a very short distance.

The frontrunners reached the Bloukrans River just over
an hour after the start, catching the water at a relatively easy level for
crossing, but still requiring a 30-metre swim. At this point the leading bunch
included previous winner Ian-Don Wauchope as well as top trail runners Andre
Calitz, Greg Goodall and Michael Bailey. At the Lottering River crossing,
halfway into the race, Andre had opened a small gap, despite this being his
first Otter, relying on his mountain running skills and strength to negotiate
all the climbing and fast descents.

However, with just 5km to go the trail has less steep
ascents and becomes very rocky and technical, and this is where Iain-Don Wauchope’s knowledge of the route kicked in,
and he managed to sprint away from Andre and win in 4:23:24 to Andre’s 4:29:19.
Both comfortably broke Ryan Sandes’ one-year-old course record of 4:40:15.
Legendary US trail runner Krissy Moehl was first home in the women’s race.