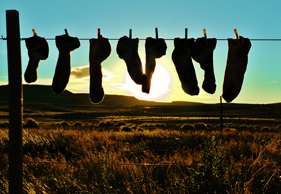 Dave’s running
mission began when he travelled to
to meet up with his parents before a marathon run in .
Upon arrival in northern ,
he thought, “why not just run down the country?” And so, under the banner of
the World Wide Fund for Nature (WWF), Dave ran 5 200km to raise funds for rhino
conservation. “I needed some way that I could give back,” he explains. Having placed
fourth at the Antarctic Marathon, he then set his next goal: Running 2 500km
along the SA coast from Walvis Bay to , for the conservation of penguins.

“My running
is a way of travelling, and I have met a lot of locals along the way and
experienced their world,” he says, as he prepares to undertake his next
journey, a monumental 9 000km across to spread the word on
endangered whales. Living out of his trusty Jeep Jogger Pram full of food, his
sleeping bag and tent, Dave’s mission is a very isolated, personal goal, but
one that is very rewarding and which excites him greatly. “When I run across over
nine months, I won’t be seeing the usual tourist spots that everyone goes to. I
have my wet wipes and my supplements, and I will take it as it comes – I can
run 45km the one day and the next day can be shorter.”

Dave participated
in sport while growing up in ,
but was never a stand-out athlete. When he ran, he knew he wasn’t the quickest,
but knew that he loved it. “I entered races, but I love doing my own thing!”
Now, under his foundation Vidamago, Dave is using his running to build a
network for fundraising – especially in wildlife education. “I’d like people to
see what I do for animals and then give back in their own way,” he says. “I’ve
just made that decision to do something about what I care about.”

Dave’s
Penguin Run in 2012 was a stepping stone to being fit for despite
his wariness about the cold weather. “I’ll probably hit the
in November and it will be brutal with three-degree weather throughout the day!
The great thing about this run is my freedom – I just know that the
will be on my left.”

While he
has no set routine for ,
he will spend mornings running and then pitch his tent in the afternoon if
there are no small towns around to discover. “Running overrides all the senses.
There are smells, tastes, sights that just contribute to a great experience.”
While many may envy Dave’s ‘job’, he feels that anyone can make the decision to
do something. “You should never limit yourself. If I take twice as long as I
intend to run across ,
then so be it. As long as I’m a part of the experience.”