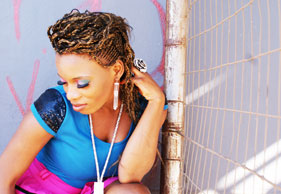 Born in
Mafikeng and then moving to ,
Nothende remembers growing up with music and receiving her first bass recorder
from her grandfather. Her passion for music was evident when she began writing
songs at age 11, and after practising church hymns, her school teacher made
sure she joined the choir. Soon Nothende was on the road to stardom: “I started
singing solo and I broke out of my shell,” she says.

After school,
Nothende attended a TV audition and someone heard her sing – and had her in a
studio within three hours to record her first single. Today, she’s a hit on
radio stations across the country, with several number one singles to her name,
and has grabbed South African Music Award (SAMA) nods for her debut album LoveLight. And Nothende says she puts
everything into her music: “Why bother if you don’t sing with emotion? Music
has to be real because it has the power to affect people. I want to give my
audience that high.”

A sports
fanatic at school, Nothende competed in athletics, swimming, gymnastics and
basketball, and says she appreciates the health benefits of running and eating
right. She fits in a run three times a week and often changes her routes for
different scenery. “I like to challenge myself and to dance on stage, you have
to be fit!” she says. “So in between music and tours, I keep active – time
doesn’t stop and you need balance. Even if it’s a 30 minute run! When it comes
to my music or changing my eating habits, I never limit myself.”

And so, three
years ago Nothende decided to give up meat and alcohol, and after six months
she could feel the difference. “I felt incredible. I adapted easily, and though
it was an experiment at first, it has changed my life.” Now, when touring, she
makes sure she carries fruit everywhere, and says she always asks organisers at
events to give her the vegan option. Nothende also grows her own vegetables and
makes juices and shakes at home, where she spends a lot of time in her kitchen experimenting
with recipes she shares with her mom, who has also embraced veganism. “I eat a
lot now, but I never get that full feeling. I’ve also not been sick the last
three years!”