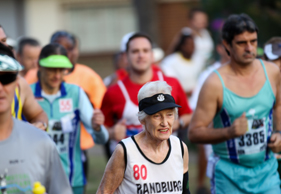 She remembers her very first run
clearly. It was early morning as she ventured out all by herself, armed with
nothing but a brand new pair of running shoes and a strong will to do something
healthy that would combat the osteoporosis she had been diagnosed with.
Initially, Deirdre walked three steps, then ran three steps, because running
for anything longer was simply an impossible ask! That was 2009. Barely three
years later, shoe not only runs much more than three steps at a time, she
regularly finishes on the podium in her age category in races and can also lay
claim to personal bests of 60 minutes for 10km and 2:15 for the half marathon.

For
many years the word exercise did not exist in Deirdre’s vocabulary, mainly due
to the fact that she was born with a missing vertebrae and believed that she
had to keep still. At the age of 38, after having children, she underwent a back
operation, but battled even to lift a teacup while recovering. “I eventually
got stronger, but always stayed careful of my back,” says Deirdre, a concert
pianist who moved from England to South Africa with her family in 1970. They
moved into a house in Randburg, where Deirdre still lives today, 42 years later.
Her husband, John, compiled crosswords for The Star for 20 years, but passed
away several years ago. Fortunately her four children and grandchildren all
live nearby.

Eleven years ago Deirdre was diagnosed
with osteoporosis and the medication she was put on made her ill. “I was going
to doctors to be cured of what other doctors gave me,” says the vegetarian, who
visited a dietician and was advised to cut all sugar, salt, white flour and
caffeine from her diet. She also did some strengthening exercises designed by a
biokineticist as well as yoga, Pilates and an urban fitness outdoors class, all
in an attempt to strengthen her bones. “But then one day I saw my son running
and I thought, now that is something I should try!” And Deirdre has never
looked back.

Her first race in 2010 was the
Randburg Harriers Valentine’s 10km, which she finished in 1:25, and as her
running times gradually improved, so Deirdre’s passion for running grew. In her
first year in the sport she completed 36 races, then last year she set her
sighs on getting as many medals as possible, so she ran 58 races! Even better, 2012
has really been her year, with Deirdre regularly winning her age category. “I
try to do races on Saturdays and/or Sundays, and I drive myself to a race.”

She
enjoys 10km races most, as she feels the distance is just right, ‘not too short
and not too far.’ Though she did her first Old Mutual Two Oceans Half Marathon
this year, she feels 21km is a bit of a push, despite finishing second in the
70-plus category in a time of 2:25. “The last part of Two Oceans was the
hardest to finish and the weather was terrible, but I enjoyed getting a prize.”
And yes, she has already entered for next year’s race!

Her training is consistent: Four days
a week, 7km a day, same route, same time, 5:30 every morning. “People are so
encouraging, when they see me run – they always tell me to keep going.” Then on
top of her running, she also attends a Fitness League class twice a week, where
she gets a complete gym-like workout without it being too demanding. She
usually takes a rest day before and after a race. “Considering my age, I think
two days’ rest is best,” says Deirdre, who does strength exercises and
stretching before every run. And don’t think this granny has days where she
does not feel like training. “I enjoy my rest days, but on other days I don’t
just want to lie in bed. There are things to be done!”

And busy she is indeed. Apart from running,
her days are filled with music, something that has been in her blood since the
age of five when she started playing the piano. “I played for the Rosebank
Choir for 12 years before teaching piano at Kingsmead College in Rosebank for
19 years.” Today she teaches at St Peters College in Sunninghill from 12 to 5.
After fighting the traffic, she arrives home at about 7pm and then still
dedicates an hour to practising the piano, as she is part of a musical group
called Festival Ensemble, periodically playing at weddings and cocktail
parties. “Music and running have so much in common, both are a discipline and
requires perseverance. It is a lonely pursuit, but both provide enormous
self-satisfaction,” says Deirdre.

AGE IS ONLY A NUMBER

Deirdre
firmly believes the older you get the more exercise you need and not the other
way around! “I played music at old age homes and retirement villages and some
of the people there just went to sleep while we were playing. The only thing
that sometimes kept them awake was the cake! People think when they hit 60 they
just have too sit and that they are too old to start exercising. I think they
should all start with gentle walking and then even some running, but if running
is too much they can stick to walking. As long as they do something! I once
read a letter of a woman saying she is so lonely over weekends. Then I thought
of how exciting weekends are for me. I get to go to races and meet so many
different people. I am in a happy atmosphere on weekends.”

She
is a strong believer in healthy eating habits and makes sure her diet consists
of nothing but the best. Breakfast includes ground nuts, seeds and mixed
berries with soya milk, while lunch is always a peanut butter or cheese
sandwich. She makes sure dinner includes two vegetables. Her one indulgence is
decaffeinated cappuccinos. “I mark my races in a logbook with an A for good and
a B for not so good. The races where decaf cappuccinos are sold immediately get
an A, no matter how difficult the route was!” says Deirdre, who stands 1.58m in
her socks and weighs in at a feather-light 40kg.

She
reckons her running ability is partly down to good genes and partly her diet
and exercise regime, and it is all paying dividend for her health: “My
osteoporosis improved by 5% last year.” Now she would like to keep on running
for as long as she can. “I don’t feel 81 and would like to inspire other older
people to run. Every morning I get up and feel my legs, then I say: ‘Well, I
still have them,’ before I go run.”