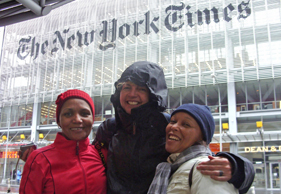 My NYCM started with a casual comment by
my running friend, Marlene, that she wanted to run this iconic race in 2012, and
soon I found myself putting down a deposit. A series of small miracles happened
and the next thing I had enough money – the once in a lifetime event with two
of my friends was taking shape. Months raced by and soon it was time to pack. I
heard about the approaching hurricane before we left for the airport, but it
couldn’t dampen my spirits!

The three of us arrived at a very busy
JFK airport, eager to experience the Big Apple. Heavy clouds darkened the
world, news reports told us to expect the worst by Monday afternoon and some
areas close to the shoreline were evacuated, but it seemed to be dismissed by a
lot of the locals. The wind came up and the rain started, but in our district
it felt no worse than a Highveld storm. We walked the eerily empty streets and
saw sandbags in front of some doors and tape crossing big shop windows. Times
Square blinked as normal, but it seemed like a case of ‘the lights are on but
nobody’s home.’

Sheltered in our hotel, we watched the
destruction in disbelief, and by Tuesday most of the storm was spent. Then the
race organisers said: “This year’s marathon is dedicated to the City of New
York, the victims of the hurricane, and their families,” but soon runners were being
accused of selfishness and a lack of perspective. So, on the Friday evening, the race was called off
and it was announced, “While holding the race would not require diverting
resources from the recovery effort, it is clear that it has become the source
of disagreement and division. We cannot allow a controversy over an athletic
event – even one as meaningful as this – to distract attention from all the
critically important work that is being done to help New York City recover from
the storm…”

My heart sank as the realisation hit us.
Anger, guilt and disappointment rushed through me. I heard stories of runners
who had diverted cancelled flights in a desperate attempt to get to the city in
time. Others had arrived at powerless hotels and sought alternative accommodation
at huge expense. Some had taken money from pension plans to make their NYCM
dream come true. This was a once in a lifetime trip for many of us and the
timing of the cancellation is what angered most runners. If it had been
cancelled the day after the storm, it would have been understood, but to say it
was on and then cancel less than 36 hours before the start was a bitter pill to
swallow…

Some runners announced they would still
run the route as planned, but different runs in Central Park were also planned.
We decided to join some of the South Africans for a run in the park, and on
Sunday morning there were thousands of runners in the park! Some kind people
were handing out water and a great atmosphere gave me a taste of what the NYCM
would have been like. We did one lap of seven miles and then sat in the sun to cheer
on the athletes doing four laps to make up the marathon distance. I still don’t
know whether I should laugh or cry, but one thing I know for sure is that New
York always offers unforgettable experiences!