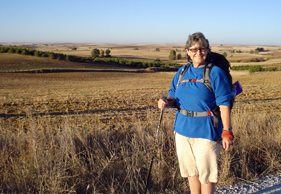 At the beginning of 2011, Liz heard about a woman who
decided to change her life by losing weight and training to climb Chile’s
dormant volcanoes. “I thought to myself ‘I could do this,’ and my daughter Lisa
told me I should find my own adventure,” says Liz. “I heard about the Camino ten
years previously from a lady who had done it and I just Googled from there!” Thus
the plan was set, to walk from Roncesvalles, near the Pyrenees Mountains on the
Spain-France border, to the Cathedral of Santiago
de Compostela, near Cape Finisterre on Spain’s Atlantic coast, where
St James is reportedly buried. Liz wasn’t even daunted by the prospect of
walking 800km, not having done anything so active in her life before.

Liz started by asking her boss for seven weeks’ leave
for the historic walk. “I felt so strong about it and my boss knew it. I even
found someone else to stand in for me while I was away.” However, training for
the walk was a difficult proposition for Liz. Initially, she walked around her
neighbourhood block a little hopelessly, but after a week it got a little
easier. “I built up to walking for an hour-and-a-half during the week and every
Saturday or Sunday I would walk for two hours,” says Liz, “and when I got my
fitness, I started walking with a 10kg backpack for the preparation.”

In the process, Liz lost 10kg and was looking forward
to testing her limits, but just before she left for Spain, a close friend
offered a warning: “She said, ‘You’re going to wonder what the hell you’re
doing when you start.’ And it happened,” says Liz. “The first few days were
torture! The route was rocky and by the end of the day your feet are sore, but
eventually I got used to it.”

With two changes of clothes in her backpack, along
with her passport and local money, Liz followed the Camino’s iconic scallop
shell route markers. Her calves were soon tanned and she says she got a little
help with directions on route. “I was hopeless with direction. Someone just
told me that the sun should be behind me and the mountains should be on my
right! It was absolutely beautiful!

“Also, in every village you stop over, you can explore
the town before sleeping at a hostel or convent at night,” she says. In some
cases, the stopovers were inexpensive, with some monasteries simply asking for
donations. Liz also lived on cheap ‘Pilgrim Meals’ that cost eight Euros and
would give her the energy for the next day’s 20 to 25km path. “They were pile
portions! A huge starter, main and pudding in a tub. You’d also get bread and
water and after the long walks I’d look forward to eating like a pig,” she
laughs.

Liz also enjoyed planning her route and meeting people
along the way. The night before a stage, she’d work out what villages and
tourist spots she would stop at the next day, and she relished the global coming
together of all shapes, sizes and ages on the way to Santiago. “I met people
from all over the world, and walking through 10th century tunnels, I
realised that thousands had walked that way. But best of all, I didn’t have
that normal day-to-day baggage – there was no traffic, and no deadlines. Never
in my life was there so much freedom!”

Two days before the finish in Santiago, Liz walked
into a small village pub at the end of her day and relaxed with a cold beer while
watching a Spanish quiz show, when suddenly she gave in to tears. “I was just
overwhelmed and sobbed right there. They say there’s three parts to the walk: The
first is the test of the body, then the mind, and then the soul.” Two days
later, Liz and the German friend she had met en route walked through the plaza
to the beautiful cathedral in Santiago, looking a bit bedraggled. “Everyone
looks shabby at the end, but what an amazing moment!”

Liz is already setting new goals, including a similar
pilgrimage route in Italy and hiking in Butong. Her inspiring new outlook on life is simple:
“We create our own obstacles in life. You must just choose what you want to do,
what challenges you, and what you enjoy!”