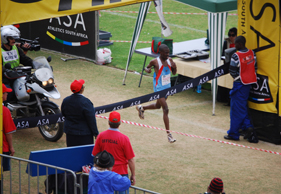 In July, Stephen Mokoka lined up in the London Olympic
Marathon aiming to run a 2:06 time, but he eventually limped home in a
disappointing 2:19:52. However, he quickly bounced back at the SA Half Marathon
Champs in Cape Town in August, running a blistering 1:00:57 to not only retain
his national title, but also take 30 seconds off his personal best and set the
fastest time ever run in South Africa on an unaided course. That saw Stephen
selected for the World Half Marathon Champs in Kavarna, Bulgaria in early
October, where he clocked 1:02:06 to finish eighth for the second time at these
Champs.

“The Olympics was a great experience and learning
curve for me. We went through halfway on 63 minutes, which was the 2:06
pace I had trained for, so I was comfortable and had more in the tank,” says
Stephen. “But then things started getting hard at 30km. I was still supposed to
run at least 2:16, but had to stop for three minutes with just 500m to go due
to cramp. I gave it my best shot, and if I could race it
again I’d do it the same way. It showed that I have the speed, but I need to do
more endurance to stay with the top guys.”

“When I got back, I took a week off, then told my
coach Michael Seme that I want to make the SA team for the World Half Champs.
The pace in Cape Town was very quick right from the start, but I knew I had the
strength, endurance and speed to win. I used to be scared of pushing too hard,
but after breaking 28 minutes on the track for 10 000m in 2009, I felt
comfortable to run 28:30 in the SA 10km Champs in 2009, which allowed me to
clock 61 minutes in a few half marathons. Still, I didn’t expect a sub-61 and
was very happy with that!”

Stephen
is undoubtedly one of SA’s top runners at the moment – and versatile – having
won multiple national titles at all distances from 10 000m on the track,
through cross-country to 10km and 21km on the road. He also boasts a marathon
PB of 2:08:33, and he has steadily climbed the ranks on the international
stage. In the World Half Champs he finished 67th in 2008, then
popped into the top 10 in 2009 with an eighth position, while in the World
Cross Country Champs from 2008 to 2011, he moved up from 74th to 32nd,
then 22nd and finally 15th. He was also 13th
in the 10 000m at the track & field World Champs in South Korea last
year.

The 27-year-old final year sports management student
at TUT in Pretoria says he hopes to open his own business someday, but for now
is still focussed on running, with his sights firmly set on the marathon at the
2016 Rio Games. “I will be 31 then and will focus on the marathon, but there is
still huge room for improvement in my endurance, so I still need to get my
speed up through track and cross country and I will focus on shorter distances
for now. The marathon is my long-term goal. I also want to get into the big
city marathons, and my ultimate goal is to win one of them and run one of the
fastest times.”

“Athletics has played a major role in my life, and the
hunger for success drives me on. I still want to make my mark in the world of
running, so people will talk about me like they do about Shadrack Hoff and
Hendrik Ramaala… I want to be on the same list as those great athletes, but
when I get there, I will still try to achieve still more, because I want to
keep the name of SA athletics on the map. It is always nice wearing the green
and gold. Out of nine provinces and so many people in South Africa, to be
selected to represent your country is a big honour. So even after that hard
Olympic run, I just had to go to the World Champs, because it means a lot to me
to try raise our flag high.”