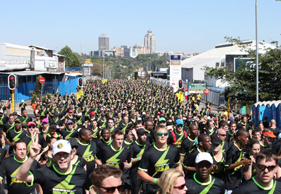 “So here we are, hanging out on the M1 highway after a
Sunday morning run,” remarked running buddy Craig van der Westhuizen shortly after
we had completed a race which was by no means ordinary in any way! Firstly, for
the first time ever in South Africa, the race ended right in the middle of a
highway, which meant thousands of runners were doing the same as Craig and I, ‘hanging’
on the M1 Highway after completing the race. When do you ever get the chance to
‘hang’ on a highway in South Africa, let alone alongside 20 000 other runners
in one of the biggest 10km fields in the country?

Part of the global Nike WE RUN City 10k Series tour, hitting
34 cities in 17 countries and connecting 400 000 runners, this was a second for
South Africa, after the inaugural Nike Run Free event in March, which saw 10 000
runners take to Johannesburg’s CBD in a night race. Just like that first run,
this latest event was superbly organised from start to finish, despite doubling
in size – truly world class, in my experience! Also, in what was a first in groundbreaking
digital innovation, Nike only officially revealed the route once all 20 000
registered runners had signed up, as each runner helped reveal a segment of
this route through their registration.

The run started in a normally traffic-packed Katherine
Street in affluent Sandton, with all the runners donning their official race
day tee. I was joined by Modern Athlete
colleagues Rui Dos Santos and Nicole de Villiers at the race, and later also
met up with some running buddies from Bedfordview Athletic Club. With our green
face paint on, we waited in an electric atmosphere for the starter’s gun… but there
was to be no gunshot. Instead, the start was heralded by fireworks, just part
of the superb effort put into organising this race.

The first two kilometres took quite a bit of bobbing
and weaving through the thousands of runners – it was always going to be a
challenge to run a good time in a race of this magnitude. The race took us
straight into the heart of Alexandra, one of South Africa’s poorest townships,
and what really stood out for me was how in a matter of only five minutes we
ran from a multimillion Rand suburb to a township where hardship and extreme
poverty unfortunately still prevail. It was therefore all the more heart-warming
that the people of Alexandra were lining the streets in their thousands,
cheering runners along and adding to what made this race extra special.

The route was definitely not easy! There were some
major uphills to contend with – and they were not short! If it wasn’t for Craig,
I would have probably taken it a lot easier, as it was very clear most runners
were out there to enjoy the day and not to chase PBs. Then came the extra
special part, running onto the M1. Apart from the fact that it was a welcome
breather, being a relatively flat stretch, it brought with it a great feeling
of freedom to run where very few others have ever finished a race – on a major
highway in South Africa! As we crossed the finish line I knew I was one of 20
000 runners who took back the streets of Jozi on this special day. What a great
feeling of freedom!

Knowing that the race gave back to the community of
Alexandra was a great incentive to enter this race, with a portion of each runner’s
registration going to developing grassroots running. This enabled 1 700 children
from primary schools in and around Alexa, as well as from Nike’s grassroots
programmes facilitated in partnership with Sport for Social Network and
Grassroot Soccer, to participate in an accompanying 2.5km race. These kids received
a race-day tee, cap and a medal. For many of the children taking part, it was
their first official race experience, with the hope of igniting an ongoing passion
for running.