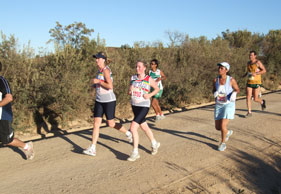 The
present-day PAC is actually an amalgamation of two clubs, the original club and
the Paarl Athletes Club, which joined forces in 1992 as old racial demarcation
lines were left behind in the post-apartheid era. “Boland Athletics said we
should only have one club in Paarl, so we joined forces, and we decided to keep
the name and clothes of the PAC,” says present club chairman Brandon Du
Plessis. “In recent years we’ve grown from 120 to
240-plus athletes, and we’re now the second-biggest club in the province, with
the focus on road running, because we unfortunately usually lose most of our
young track athletes to the universities.”

“So we don’t have any big name athletes at the
moment, but Dumisani Dosi, Angelo Booysen, Steyntjie Prins, Caley Bredenkamp,
Yvonne Niewoudt, Huguegge van der Merwe and Jacqueline Bakkes all do well in
their respective categories on the road. We also have some promising youngsters
in track and field, including Helene Swanepoel, who should be going to the
World Youth Champs later this year to compete in the 400m hurdles, and her
sister Marina is also doing well in the same event, while Janey van der Merwe
and Jana de Jongh are promising middle distances and cross-country runners.”

Brandon says that the club holds weekly club runs
on Tuesday evenings, starting from the Paarl Rugby Clubhouse at 6pm in summer and
5:30pm in winter, plus there are regular Saturday morning pack runs. They also
put on three races each year, with the highlight being the Macdonalds Paarlberg
Half Marathon& 10km in October. Then there is the Taalmonument 10km in
December, and this year will see the first running of the club’s 10km race
combined with the Boland Cross-country Champs in August.

“We also put on a lot of track and field events at
the beginning of the year, or help out at others, including the big school
meets, the 4M and the Paarl Girls High meet. We even have one meeting in
October just for three specific events, the pole vault, hammer and discus.”