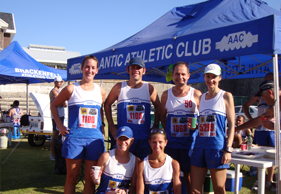 Based
at Hamiltons Rugby Club, right next to Cape Town Stadium, the AAC club is ideally
situated for runners living in the City Bowl and on the Atlantic Seaboard, as
well as for runners who work in town and prefer an afternoon or evening run to
avoid peak traffic. And the club has plenty of regular club runs to choose from,
offering some of the best views you’ll find anywhere on the run! “We encourage
our members to explore
and its stunning surrounds through the many varied club runs, both during the
week and on weekends. And anyone is welcome to join us,” says Club President
Chris Readman.

The
regular club runs include pleasant jaunts along the Green Point/Sea Point
Promenade, or mountain runs starting from the Lower Cable Car Station or from
the Rhodes Memorial and running through the .
On the weekends the club holds longer tar runs up to 30km starting from
as well as 20km trail options setting out from UCT. The club also presents two
time trials per week, with a 5km from the Sea Point Pavilion on Wednesday
mornings, and a 5km or 8km option on Wednesday evenings, starting opposite the
Newport Deli in ,
near Mouille Point Lighthouse. So you really are spoilt for choice with this
club…

AAC
was founded in December 1979 and currently has a membership of just under 400
runners. The Club’s objective back then was to encourage and promote running in
the Green Point, Sea Point, and area, and that pretty
much remains the same today. For that reason, beginners are made to feel
especially welcome in the club. “If you are completely new to running or just
coming back from a break or injury, then we offer a group for beginners called
The Penguins, managed by Radesh Moodley, who also accompanies the various
Penguin runs. We have different packs running at different paces so that
everyone can be accommodated,” says Chris.

Club
Administrator Sue Ullyett adds that “AAC doesn’t really have elite runners and we
prefer to focus on the members themselves, and also on getting people who were
on the couch to running a 5km. A lot of clubs have elites and we wanted to do
something different.” Sue is also responsible for the regular e-mail
newsletters to all members, filled with the latest club info, upcoming runs and
races, plus info on club socials and much more. Radesh also sends out a weekly
e-mail to all the Penguins, so AAC members are always up to speed on all things
running.

AAC
organises the Lighthouse 10km night race in March, followed by the hugely
popular OUTsurance 94.5 KFM Gun Run Half Marathon, 10km & 5km in October.
The club is also using the Gun Run as a platform to fund grassroots running
development, in conjunction with the JAG Foundation. “The event raises around
R50 000 for JAG, to go towards the community cross country league for school
children aged 7 to 18 that we have started,” says Sue. “The focus in on mass
participation, with points going to all participants, and it’s a great way to
get kids active.”

For
more on AAC, contact Sue Ullyett on sullyett@mweb.co.za or visit
www.atlanticathletic.co.za.