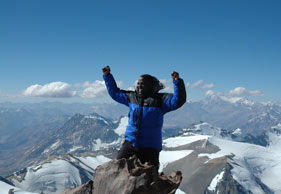 In 2003 he
made history by becoming the first black African climber to stand on top of the
world, and he followed that up by becoming the first black African to complete
the Seven Summits Challenge, to climb the highest peak on each continent, as
well the Three Poles Challenge, to climb Everest as well as trek on foot to the
North and South Poles. And he did it all to raise funds for various charities,
as well as to prove a point: “I wanted to tell the world that we Africans have
got what it takes to achieve greatness, regardless of colour.”

It was in
Sibusiso’s second Everest climb in 2005, on the more technical north face, that
he came close to death. “On the way down on summit day, I found myself alone,
without food, water or oxygen. I was seeing death in my face, but I didn’t want
to die, so I started crawling on all fours and struggled on for about three
hours until I made it to camp.”

That’s the
same irrepressible spirit that Sibusiso takes into his running. He has finished
four Comrades Marathons and will be running his fifth in 2013, aiming to break
nine hours for a first Bill Rowan medal. He also recently did his first trail
stage race at the Pronutro AfricanX Trail Run, partnering Comrades legend Bruce
Fordyce in an unforgettable experience. “I have always used running in my
training regime for expeditions. I love running, and that’s why I started my
own running club near Nelspruit, called Born To Win, to help instil the belief
in young stars that they are born to win, whatever their circumstances.”

Sibusiso is
married to Nomsa and is the proud father of four, and today is self-employed as
a sought-after motivational speaker. “I look back and say, my goodness, it’s
amazing I have done so much, but my bucket list just gets fuller. I realise that
people look up to me for inspiration, and my message is simple: Every person
has their own Everest to climb, challenging you to reach the top, and if you
set yourself goals and work hard for it, you will get there.”