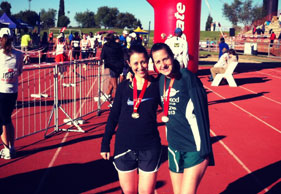 Feige and
Zissy Lewin have an interesting sisterly bond when it comes to running. “There’s
a ying-yang in our partnership,” explains Feige, “and at Comrades this year,
we’ll bring different things on the day.” Born and raised in , the sisters were never sporty
as kids, but Zissy started running at 21 to get fit, while Feige prioritised
strength work in the gym. For Feige, running just didn’t cut it, and even
though her sister kept encouraging her, she couldn’t face a run without
struggling. However, two years ago she decided to give it a try.

“I started
running more because I had no strength in my legs,” says Feige, who entered her
first 5km at the Spar Ladies’ Race, then progressed to a 10km race in and joined the
Nedbank Running Club. Her love of running blossomed, all while Zissy was living
and running in ,
and it was then that the sisters decided to take on Comrades 2013 together,
even though they were worlds apart. “We always say ‘We can do that!’ and now we
want to cross that finish! Once we had the Comrades idea, we couldn’t get rid
of it,” says Zissy, who has seen her 4:43 New York Marathon finish improve to
3:57 thanks to the focused training, while Feige’s debut 5:49 at the Soweto
Marathon has been cut to 4:28.

Also, after
discussing the idea of Comrades, the sisters were also planning to introduce the
Nutreats range of sporting nutrition goods to the SA market, and Zissy came
back to SA to help Feige launch the Nutreats brand in 2012. “We wanted to
educate people on what to put into their bodies,” says Feige, “as we have
learnt to use it as runners.”

The sisters
have planned their pre-Comrades protein intake and light carbs before race day
as well as their post-race recovery meals. On race day, they’re planning on an
oats, seeds and banana breakfast with orange juice, and have tried and tested
gels and 32GI chews to keep their momentum going during the race. With their
family going down to support them in ,
they’ll also receive encouragement on the road.

Having
trained to do an 11-hour Comrades, the sisters have outlined rules for
themselves on race day:

?
There
has to be one strong link at any given time.

?
No
public urination – the sisters will plan their toilet stops.

?
Drink
some water when eating on the route to help digestion and eat foods and bars
that are easy to chew and swallow.

?
At
the finish, there will be no sad faces.

Zissy has also
organised their programme to do some light runs at the beginning of race week,
then three days’ rest before the race, while spending just day one at the Expo.
“We have planned everything, but we still know that anything can happen on the
day.”says Feige, adding that they attended numerous seminars for Comrades
novices and gathered advice from various runners. Zissy adds, “I don’t see us
crying at the finish, but who knows? We’re just ready for the vibe and creating
this memory together.” (And they’re already talking about joining the Unogwaja
Challenge in 2014, to cycle from to Pietermaritzburg in 10 days, then run the
Comrades on the 11th day!)

For more info on
Nutreats products and to create your own goal profile, visit www.nutreats.co.za
or find @Nutreats on Twitter.