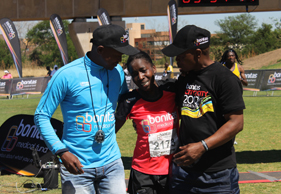 These days the event, known as the City2City since
1988, attracts a field of several thousand runners, with accompanying half
marathon and 10km races as well, making it one of the bigger events on the
Gauteng calendar. It is run in alternating directions each year, and this year
saw the ultra start in Wanderers, Johannesburg, and finish at the Centurion
Rugby Club, the so-called ‘Down Run,’ which meant it once again offered runners
a mix of flat stretches with torturous
knee-aching downhills.

Johannes Kekana, wearing brand new veteran age tags on
his vest, clocked an impressive 2:50:39 to win
this year’s main event and grab the R30 000 prize after a massive battle with
defending champion Odwa Tunyiswa, who eventually faded to 10th.
Johannes’ time was the third-fastest ever by a SA veteran for the distance. In
the women’s field, Tshifhiwa Mudalamo came in first in 3:28.22, looking
exhausted and with legs cramping, while former SA Marathon champ Charne Bosman came
home a minute later after a conservative first race beyond the marathon mark.

“I’m 40 now and I knew I had to keep
strong with all the young guys. It was an easy course but for one tricky hill,
but I’ve trained in this area so I knew what to expect. I felt confident to
push with 10km to go.” – Johannes Kekana

“It’s my first ultra and with about
7km to go I thought it was over for me. In Midrand, because there were huge
hills and I was starting to tire. But I stuck to my pace and didn’t want to
blow it. My next goal is doing well at Two Oceans.” – Charne Bosman

“On two uphills I struggled a bit but kept on going. It’s my
second City2City, having won it last year. It’s a race that definitely tests
your fitness at this time of the year.” – Lizih Chikore