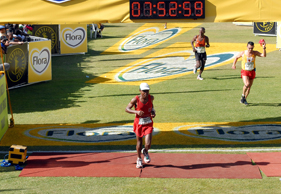 “It’s simple for
me,” says Nzondwane resident Mandla Zwane. “I was born blind, so I’m used to
it. I can run in the dark, too, because that’s how I am,” he laughs, “I know my
way around training and I know Comrades.” From a young age, Mandla had a love
for running and at Arthur Blaxall School in Pietermaritzburg, he would compete
in the 400m and 800m races and beat many an opponent. As he grew older, the
distances became longer.

In 2006, Mandla
entered Comrades for the first time. As a boy, he would join the spectators
alongside the road and cheer the Comrades runners on, wishing to be a part of
the glorious event one day. “I knew I could make it, so I did,” he says, “and
now I want to keep coming back to Comrades to cut off some of my finishing
times.” From a 9:10:52 finish in 2007, Mandla pushed up to 8:19:45 the
following year. This year he finished in a stellar time of 7:52:58 (his
personal best) and has no intention of slowing down. He’s completed the Comrades
six times now, all without a running guide, and holds five Bill Rowan medals as
well as one bronze.

Mandla survives on
a disability grant and his gracious don’t-pity-me attitude has made him an
inspiration to many runners and supporters. “I get so much support when I run.
There are always people looking after you at Comrades!” Mandla was also a
recipient of the 2012 Spirit of Comrades award for his determination to never
back down, despite his disability. “I didn’t believe them when they called me
about the award. Then they kept calling and it was an amazing surprise to
receive it. It was the first time I wore a suit!”

For Mandla, the
secret to his talent is not smoking or drinking, training hard, and the
unbelievable support he gets from his mother. “Some people tell her I should
stop running because it’s dangerous and I could get injured, but she tells them
that I can do whatever I want. When I don’t have enough money to go to races,
she always helps me where she can and motivates me.”

His future looks
positive and he has already entered Comrades 2013 and is looking to do well
when Two Oceans rolls around. “I am happy with my life – because you may never
have everything in life, but you must be satisfied with what you have
achieved.”