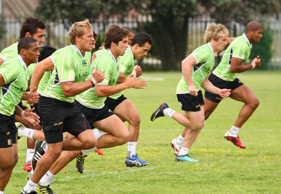 The Cell C Nelson Mandela Bay
Sevens might be dubbed ‘Rugby’s Biggest Party,’ but when the boys are out on
the field, it’s everything but a party. These guys are fit, and to top it all, very
fast! Just how fast the Sevens players are is evident in America’s Carlin Isles:
With a personal best of 10.13 seconds for 100m, Isles is ranked 78th
in the world over the distance, which means he would have qualified for the
semi-finals of the 100m at this year’s London Olympics.

Our very own Blitzbokke certainly
don’t have to stand back for the likes of Isles, as biokineticist Allan
Temple-Jones is not only one of the best in the business, but also believes in
scientific training to simulate what is required to perform in match
situations. “Running is massively important as Sevens is about high intensity
bursts of energy being performed repeatedly. The players need to be conditioned
to be able to do this faster, longer and with greater intensity than the direct
opposition, while showing minimal fatigue,” says Allan, who is currently in his
sixth season with the Blitzbokke and who previously worked at the High
Performance Centre at the Sports Science Institute of South Africa in Cape Town.
There he worked with various elite sportsmen and teams, including the Cape
Cobras cricketers, Santos Football Club and the SA Men’s Hockey team.

Allan’s coaching involves a wide range of
cross-training methods including boxing, rowing, wrestling and grappling
sessions, hypoxic pool sessions and even yoga, to name but a few, but running
and speed sessions are top of the list. “On a Sevens rugby field the intensity
is extremely high, with very little opportunity to recover. You always need to
reintroduce yourself into play by not being caught on the ground; if you don’t,
the opposition will look to exploit this. You are also covering the same size
field with only seven players. This in itself means that physical conditioning
is paramount to performance.”

THE SCIENCE BEHIND IT ALL

Allan is known for his technical approach to coaching
and his tools of the trade such as laptops, heart rate monitors and other
gadgets. He says that on top of speed, technology is crucial in order to ensure
that each individual is monitored on a personal level in such a way that they
can improve and develop according to their own unique needs and abilities. For
example, by using GPS data, Allan is able to monitor each player’s intensity
during training and make sure they are reaching the desired speed zones in training,
and all players’ speed is regularly assessed over 10 metres and 40 metres.

Having tasted much success in the IRB Sevens Rugby
World Series in recent years, including several tournament wins around the
world, the team is now raring to go and ready to represent South Africa at the
upcoming tournament in PE. Allan says the boys see the event on home turf as a
special occasion: “Even though every opportunity to wear a Springbok jersey is
special, we will aim to make South Africa even more proud.”