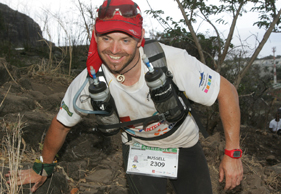 Having taken on Ironman
and Comrades in the lead-up to the brutal 180km Diagonale des Fous this year,
Russell is no stranger to leading an active life. Weekends are spent running on
trails or cycling, and he is always determined to mix it up with rock climbing,
body boarding, surf-skiing and paddling. His mornings are dedicated to his bike,
while evenings are meant for runs. “I go out and do what I can. Every weekend I
need to do eight to 10 hours of running or hiking – this especially when I
decided to do the Diagonale,” he says.

And with a busy
schedule managing the Specsavers in Sunridge Park since 2004 and developing his
eyecare software company, Spectrum Eyecare, which has provided patients with
digital eye tests since 2002, Russell’s ability to fit in exercise is
inspiring. “It’s not easy for me to juggle everything, but I always say that if
you want it bad enough, you will find a way to balance work, family and
exercise.”

Russell remembers the moment that he decided to take
on one of the world’s toughest trail runs. “After going to a talk by extreme
adventurer David Grier, I asked him what made him snap and just leave everything
behind to take on his feats, and I knew I could do something extraordinary, too.
David told me about the Diagonale des Fous and I just researched from there!”
Having planned the trip for two years (he missed out in 2011 when the entries
closed), Russell received a special international entry this year in the race’s
exclusive 20th anniversary. “I expected 160km at first, but because
it was their 20th edition, they made it tougher and a little longer
for the legs.”

With fireworks to accompany a late 10pm start, Russell
and 2800 other adventurers set off from D?part St Philippe for the finish at
Saint-Denis. The participants would have to run non-stop to get in before the
66-hour cut-off – something that played on Russell’s mind during the run. “There
were obviously moments when I thought I’d never finish, especially after
getting cellulitis on my feet, and feeling dehydrated and exhausted. I felt
broken at some points.”

The start was particularly difficult, with a steady 2
500m climb to one of Reunion’s dormant volcanoes, where it started to rain and
didn’t let up for the next 24 hours. After suffering swollen and blistering
feet, Russell needed to make a stop at the doctor for treatment, having to deal
with dry noodles, deciphering French and waiting an hour in the cold for his
appointment before heading back out on the course. After that he had to race to
make several cut-off checkpoints – at times just making it in by 40 seconds.

Russell also struggled with carrying too light a backpack,
and would run out of water long before the checkpoints, but he says at least he
now knows what to pack for future events. And despite the pain and sleeplessness,
he says the views really were worth the effort. “I remember the one view at the
top of a 3000m mountain, where the sun was rising just above a volcano basin
that was filled with clouds. That sight brought me a little bit of energy.”

Russell credits his finishing to his determination to
carry on and his stubbornness. “I’m proud that I finished. You get into a space
where you are physically broken, drained and lonely. The only thing that you
have left is the goal to finish before cut-off.” And when he saw his wife at
the finish, having seen her three times en route so she could help with food,
the emotions left him speechless, and very relieved. “I wouldn’t have done it
without my wife – but there were a few times when I prepped my failure speech!
Afterwards, I kept thinking ‘well, the race didn’t kill me,’ and I know there are
quite a few that never manage to finish.”

For Russell, the balance of work and play is working
for him, and he plans to run the 160km South Pole Race and ride the Transalps
Mountain Bike route next. “If you value balance, you’ll sort your schedule out,”
he says. “The human spirit is limitless. I’m only happy to try and fail – and come
back and do it right the next time – than never try!”