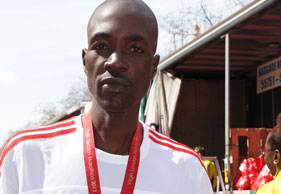 A few months ago, completing one of the
world’s most prestigious international marathons was nothing but a pipe dream
for Khubulani, whose job as a security guard in the West Rand has not afforded
him such an opportunity. But thanks to a charitable initiative undertaken by Virgin
Money South Africa, Khubulani, along with two other runners from
underprivileged communities, was given a unique opportunity to shine on an
international stage.

“It’s always been a dream to run in the
world’s biggest marathons, but I never thought I’d get the chance,” says
Khubulani, who had previously achieved four silver medal finishes in the
Comrades Marathon. “I have watched the London Marathon on TV, and when I found
out about this opportunity, I knew I had to go for it.”

This was a first trip abroad for
Khubulani, who was selected along with fellow athletes, John Persents and
Meshack Ndhlovu, based on the strength of their written motivations. According
to Khubulani, he will remember the four days spent in London for the rest of
his life. “It was amazing and we had enough time to take in all the famous
sights and the culture of the place. The support throughout the marathon was
incredible. It really helped to push me to achieve my best. I’ll look back at
this experience every day and smile. I did a really good job and it’s something
I’ll never forget.”

Since returning to South Africa, Khubulani
has revelled in the support shown by his community. “Honestly, it feels like I
won the whole thing. The support has been amazing, and I couldn’t be happier. Virgin
Money also treated us well and made us feel at home
in a foreign place. I’m so grateful for the opportunity, and happy that I got a
chance to show my talent to the world.”

However, for Khubulani there’s little
time to bask in the spotlight. Over and above his work commitments, he is
currently training to better his finishing time at this year’s Comrades
Marathon. He has set his sights on returning to London one day, and also lists the
New York Marathon as one of his future goals.