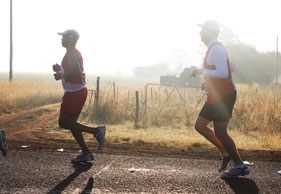 With
5 000 athletes lining up in the pouring rain in Middelburg less than a
week after the tragic Boston Marathon bombing, a minute’s silence was dedicated
to the victims of the attack, and many runners donned black armbands to show
their support for their running brethren and the supporters killed in America. “We
were deeply saddened by the news of the bombings that took place,” said Kobus
Tait, Managing Director at Forever Resorts South Africa, title sponsor of the
Loskop event. “It is truly sad that a sports event that is meant to draw people
closer in camaraderie is used to target soft and innocent victims.”

Once the
race got underway, Nedbank’s Samuel ‘Seun’ Moleshioa seemed the favourite to
take the win after his strong showing from
until the final climb, but once again Varaday’s Hill proved the decider as Transnet’s
Othaniel Phahlane came flying past him. The first-time Loskop runner then
zoomed down to the Loskop Dam finish to clock 2:46:10, just two minutes off the
course record set in 2005 by former Olympic Marathon gold medallist Josiah
Thugwane.

For Othaniel,
the win came as quite a surprise, not just because it was his first Loskop, but
also because of the tough conditions: “About 10km into the race it started to
rain really hard. When I saw one runner stop, I said I must just carry on, and
at 40km into the race I knew I could win this race.” Seun held on for second in
2:50:06, while 2010 winner Joseph Mphuthi () was third in 2:50:25. “Finishing
third again is not good,” he said after the race. “I finished 15th
at Comrades last year and want to finish in the top 10 this year. We will see
how things go.”

In the
women’s race, Kenya’s Jennifer Keoch, running in Nedbank colours, was first
over the line in a time of 3:18:11, followed by Zimbabwean Lizhi Chokera (Nedbank)
exactly four minutes later, and Lizhi’s cousin Muchaneta Gwata (Maxed) third in
3:33:44. In the tough accompanying half marathon, David Manja (Nedbank) took
line honours in 1:09:53, while the women’s title went to Nedbank’s Myrette
Filmalter in 1:25:31.