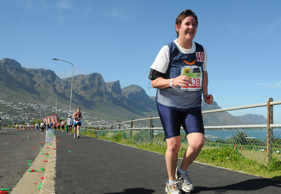 On receiving news that she was the lucky winner, Nicci
reacted the same way when she completed her first half marathon – she burst
into tears, feeling completely overwhelmed. “I was overjoyed and delighted!”
she says. “You can pick any superlative you like to describe my emotions.
Winning this is such an incredible gift to me.”

Nicci is a bit of a late bloomer on the running front,
despite being sporty at school, and was inspired to run by her friend Melanie,
who ran Two Oceans and Comrades at age 40. “I started running 10 kays and then
it eventually got to my first half marathon at Two Oceans. I’ve completed three
now and want to get my blue number for ten.” Having built up a healthy
collection of medals from races all over, she says she’ll eventually be ready
to take on her first marathon in the future.

Nicci has a clear goal in mind for managing her
franchise: To show people that everyone can
run and walk. “Your age, shape,
agility or shoe size is irrelevant, you just have to know how to put one foot
in front of the other to make a significant improvement to your health and
fitness,” she says. “I would certainly like to get people on the path of doing
a few races. Finishing a race, whether its five kays or 21 kays, and having the
medal to prove it, is a huge morale booster.” Nicci also wants to pass on her running
wisdom. “I know how daunting the thought
of even doing one kilometre is, to begin with. It just seems so far and so
undoable. You don’t have to be the fastest or the best, you just have to get
there.”

Deborah was over the moon when she
found out she was a winner, having fallen in love with running at a Run/Walk
For Life franchise 16 years ago. “It is the place that got me going. Before
RWFL, I didn’t do anything, and then I joined, met amazing people and learnt
the skills,” she says. “At school and in my twenties, I wasn’t motivated to do
anything at all, and now it’s changed for the better.”

That foundation of running skill laid
all those years ago led her to complete her first Comrades Marathon this year,
in a time of 10:55. “It was hard on the body and mind, and there were times
when I met the worst part of me, but I kept going!” Deborah has already entered
for 2013 and is prepared to juggle training, managing her branch, being a mom
to three daughters, and keeping up her love of painting (she’s already had a
few exhibitions of her work).

Deborah believes that she is
passionate about RWFL and dealing with people. “I love motivating people so
they can take pride in themselves,” she says. “I like to empower people and
show them that they can do anything. Once you get the skills learnt at RWFL,
then you become more comfortable and you can move on to greater things.”

She outlines a simple philosophy for
those who think they are not built to walk or run: Anyone can learn to use what
they have. “Once you start, you can run and walk a little. Then you can go on
to 5 kays and more with that skill. Running is something you can take anywhere
with you – you just need your shoes.”