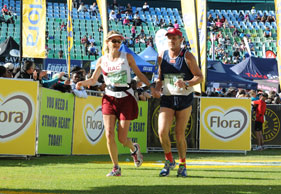 Comrades 2013 will be a very special, but also highly
emotional journey for running legend Alan Robb. Special as this will be his 40th
journey, and emotional, as he will be running it entirely in memory of his late
wife, Merle, who passed away a few days before last year’s race. “I am nervous
that something could go wrong, because I have 39 hassle-free years behind me,
and excited because it is a big milestone in my Comrades career. There will
certainly be a lot of sadness on the day, because Merle will not be there. She
was always on the finish line waiting for me. This year will really be in her
memory. I will probably be running with her wedding ring,” says Alan.

At the finish line a special group of family members
will await him: Alan’s daughter Staci, who ran with her dad last year, decided
to not run this year, but rather wait for her running hero at the finish line.
She will be joined by Alan’s mom as well as both Merle’s sisters, to welcome
him home as he joins the select group of runners who have achieved the
magnificent feat of finishing 40 Comrades Marathons. Currently just six runners
have done so, and this year three more, including Alan, look set to be added to
the list.

A LEGEND IS
BORN

Alan was a good swimmer at school, but discovered his
running genes and love of the sport when the headmaster made the whole school
run a cross-country race. “I won it and enjoyed it, so I continued running. It
was much better than swimming two hours a day just seeing the same black lines
at the bottom of the pool! Then in 1970 I bet my scoutmaster R10 that I could
run to Pretoria. I couldn’t walk for a few days, but I won the bet!”

It is hard to believe that this talented runner
“chickened out” of his very first race. “In June 1973 there was a 10-mile race
which I decided to run. There were about 50 runners and they all looked very
good, so I chickened out and went home!” Fortunately, Alan kept on running and
in the first race he ran, he won and set a course record. “I then joined
Germiston Callies Harriers (GCH) and here I am, 40 years later! When I first
ran Comrades we used to hero-worship the guys who had run 10 Comrades, so
running 40 was never in my mind. I certainly never thought I would still be
running now!”

He says that Merle was his biggest supporter, right
from his early running days. “Fortunately, she loved sport, otherwise I don’t
think I would have run for so long. She encouraged me, motivated me and came to
all the races to second me. She always said that Comrades day was my Christmas
day and that January to June belonged to me. The rest of the year was Merle’s.”

In his typically humble, understated way, Alan says he
is not so sure about being called a living legend, but it’s nice to know that
some people still remember his performances. And great performance they were
indeed! Alan is the all-time leading Comrades gold medallist with 12 golds, and
has four Comrades wins under his belt. In 1978 he became the first person to
break the sub-5:30 barrier, winning in 5:29:14, and says this run was by far
his best and most memorable. “I trained really hard and was very fit. It was
one of those races when everything went perfectly and I felt so good at the end
that I could probably have turned around and run back! I ran the entire second
half by myself and won by 20 minutes. I sometimes wonder if I could have run
faster if there was someone to push me.”

Alan’s training used to include a lot of long runs,
speed work and hill training, but this year has seen none of that. “This year’s
mileage has been the least I have ever done. In fact, I have only run the
Ottosdal Marathon and Two Oceans!” Nevertheless, he says he will be giving the
‘Up Run’ a good go, although he believes he has never been a good hill runner
and doesn’t enjoy the Up as much. “There are no easy sections on the Up Run, as
you are climbing all the way from the start to the top of Inchanga. Then in
those last 30km you are getting tired and it’s hot, so you have to have a
strong head to get you to the finish. I have finished in about 8:30 for the
last three years and I think I can still run that time, but I am also thinking
of having a really social run this year. I’ll see how I feel on the day.”

Alan is well known for his support of Liverpool
Football Club and is often seen running with his red Liverpool cap and red
socks. “Red has always been my favourite colour. Like everybody else in the
60’s, I loved the Beatles and they were from Liverpool, so that’s how it
started. One race day in 1974 I couldn’t find my socks so I went into my dad’s
cupboard and saw these red socks. I wore them, everybody chirped about them, so
I’ve worn red socks ever since… but only at races. I cannot find red socks
anywhere these days. About five years ago I bought 15 pairs, so I hope they
last!”

Alan has completed four Dusi Canoe Marathons, but gave
it a break after he contracted hepatitis. “I will be back next year. It’s far
more exciting than pounding the roads and there are plenty of war stories,”
says Alan, who also enjoys trail running and mountain biking. He would like to
carry on running Comrades for as long as his body allows him, but says he just
takes it one year at a time these days. “I’m not getting any younger and maybe
I might get to 50 Comrades Marathons.”

This year Alan is back in the colours of his first
club, GCH, of which he was made an honorary life member in 1980. After leaving
the club in 1992, he kept in touch and decided to return this year. “It is
great being back and they presented me with a great new vest and T-shirt
specially printed with my 40 years of running.”

ADVICE FROM
A LEGEND

Alan advises all Comrades runners to run their own
race! “Don’t listen to anyone who hasn’t run the race. Remember, there are
plenty of 42km and 21km races during the year, but there is only one Comrades.”
He takes his best advice from a poem with the final two lines, which read as
follow: “Think that you can and you will. It’s all in the state of the mind.”