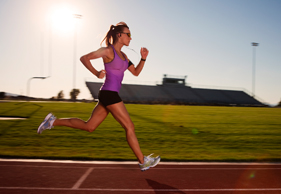 The standard marathon is the globally recognised
standard of distance running, with your running ability and level judged by
your current and best times for 42.2km, not to mention your qualifying batch
for the big ultra’s here in South Africa. So wouldn’t it be great if you could accurately
predict before a marathon race what shape you’re in and what time you’re
capable of running, which in turn would allow you to plan your race pace and
strategy accordingly? Well, according to respected American running coach and
writer Bart Yasso, you can do just that by running 800-metre intervals on the
track once a week.

While that may sound a bit far-fetched, it does appear
to work for some runners, who all swear by Yasso 800s. Here’s how it works:

?
Recover after each 800 by jogging or walking
for the same amount of time (again, 3:30 in this example).

?
Start with three or four repetitions in the
first week.

?
Continue with Yasso 800 workouts once a week
and try to add one more repetition each week until you reach 10 repetitions.

He says that runners should begin the
workouts nine to 10 weeks before their goal marathon. The first week you do
four 800s. On each subsequent week, you add one more until you reach 10. The
last workout of Yasso 800s should be completed at least 10 days before your
marathon, and 14 to 17 days would probably be better. The rest of the time, do
your normal marathon training, paying special attention to weekend long runs,
and give yourself plenty of easy runs and at least one rest day per week.

The question is, does the same predictor
principle apply to a four-hour marathoner, or a five-hour marathoner, or even a
six-hour marathoner? After all, running 800 metres on the track in six minutes
just doesn’t sound likely as a marathon gauge, does it now? But this is the
remarkable thing about Yasso 800s: Countless runners of varying abilities have
said that it does actually work for them. However, there are just as many
runners who say that Yasso 800s do not give a true prediction of their marathon
time, and that in most cases they ran the marathon considerably slower than the
Yasso 800s indicated they would.

The critics of the Yasso 800s point
out that a marathon relies on stamina and aerobic fitness, with marathoners
running below their VO2max and lactate thresholds, whereas shorter distance
speed work relies on anaerobic fitness, where you push yourself VO2max and
lactate limits. In other words, you are trying to determine your performance
potential at a long-distance stamina-oriented event by doing a much shorter, speed-oriented
workout. They also point out that other training programmes and pace
calculators say speed work should be faster than the pace suggested by the
Yasso 800s, while tempo runs should be slower, so Yasso 800s don’t really fit
into what is generally considered standard marathon training.

Another criticism is that a flat track
workout does not take into account the nature of a marathon course with hills –
especially the typical South African marathon route – nor the much greater
fatigue factor in such a long distance. Therefore, even with the proper marathon
training, being able to complete 10 Yasso repetitions doesn’t guarantee that
you’ll finish the marathon in your goal time.

So the conclusion many reach is that
Yasso 800s make for a killer workout that will leave you both gasping and
exhilarated – 10x800m is quite some challenge, both physically and mentally –
but it is not a miracle marathon time predictor. At least, not for everybody.