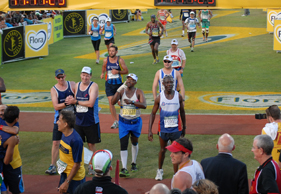 One of my most vivid childhood memories takes me back to 1976(age 9)
when Mom had placed me on the side of the Comrades road, water bottle in hand,
waiting to give it to Dad when he came past. Well, we messed up the handover
and I remember sprinting down the road after my Dad to give him his bottle. He
was running at a furious pace and needless to say, I never even got close to
getting the water bottle to him. I was picked up by Mom, dropped a couple of
kays down the road and managed a successful handover the second time around.
That was the year my Dad placed 89th at Comrades in 6:58:00, an unbelievable
achievement that my brothers and I can only marvel at now that we have
completed ‘The Big C’. For the record, we are four brothers, three of whom
completed the 2012 Comrades.

An even earlier memory takes me back to 1973.
The overnight train from Durban to Germiston was late and as I was very wary of
my grade 1 teacher, I made my Dad (who had run Comrades the day before) walk me
all the way to my classroom. I clearly remember taking an extraordinarily long
time to make our way from the bottom parking lot, over the sports fields, up
some steep steps and to my classroom. I have always wondered how long it took
him to get back to the car… especially now that I have my own experience of
recovering from the ‘Down’ Comrades, and the resultant very stiff legs the next
morning.

Throughout my 20s and 30s I watched the Comrades Marathon on TV, and in
1997 I happened to be in Durban on Comrades day and was privileged to witness
the victories of Charl Mattheus and Ann Trason. Every year I promised myself
that next year would be the year that I entered it, and over the years I have
handed over quite a few cases of beer to settle pub bets resulting from my
continued absence from the start line.

In January 2008, aged 40, I joined Bedfordview Country Club and even on
that very first walk/run that I participated in, I already knew that Comrades
was the big hairy goal that I wanted to achieve. And so on 30 May 2010, I found
myself on the starting line in Pietermaritzburg. It really is an incredible
feeling being in the starting pens for one’s first Comrades, knowing that you
are going to be participating in a uniquely South African experience. The
actual morning was freezing cold, the atmosphere before the start was palatable
and the almost eight-minute wait to cross the start after Shosholoza, the National Anthem, Chariots of Fire, the cockcrow and the starter’s gun was totally
nerve-wracking.

For the first time while running, I experienced cramps in my legs, which
brought me to a near standstill within the first 20km. I made the Drummond halfway
cut-off with one-and-a-half minutes to spare, and then made the next cut-off
point (Winston Park), some 14km later with around two minutes in hand, but with
the continued cramping in my legs I eventually had to leave the course, having
completed 62km. That was the furthers distance that I had ever run. By that
stage I had no chance of making the next cut-off and decided that I would like
to see my brother Kevin finish, who was also running his first Comrades.

Despite not finishing, some of the highlights of my 2010 Comrades day
were:

?
My brother Bruce
running about 7km with me, in his slops, from the top of Botha’s Hill to
Winston Park, and taking the infamous photographs of me running in stone last
position with my very own entourage of Comrades vehicles right on my tail.

?
Being at the finish
to witness Kevin finish his first Comrades and to see and feel the real
disappointment for me at not having finished my first.

?
Winning the Bailer of
the Year Award at the club prize-giving – thanks mainly to above-mentioned photo
shoot – and the genuine warm wishes of club members to tackle Comrades the following
year.

IF AT FIRST YOU DON’T SUCCEED…

A year later, on 29 May 2011, I stood at the start in Durban better
trained, weighing less, and wondering if the ‘Up Run’ would bring me better
fortune and a first Comrades medal. I ran well in the first half, going through
Drummond in 5:34, leaving myself 6:26 to get inside the 12-hour cut-off, but my
second half did not start well, with the beast of Inchanga taking a big toll on
my energy. Bruce was now doing his first Comrades and I met up with him three quarters
of the way up Inchanga. We were glued together for the rest of the way to
Pietermaritzburg, but we were always running against the clock and we both dug
very deeply to keep moving forward.

It was very disheartening when the 12-hour bus went past us with about
15km still to go. Even with the best will in the world, we just did not have
the ability at that time to keep the 12-hour bus in our sights. Somehow we made
it to the top of Polly Shorts, but we had a big task to get to the finish
before the dreaded gunshot would signal the end. My watch had long since died
and my ability to process anything mathematical was just about non-existent, so
Bruce and I just resorted to a sprint/walk strategy to get to the finish.

We eventually got to the stadium, with Bruce just ahead of me. The atmosphere
was electric and the announcer was busy with the 10-second countdown as I
turned the final corner, so the finish line was in sight when the gun was fired
– I saw my brother finish in 11:59:50 and I was less than 100m short! I just came
to a total standstill on the field; I was more physically shattered than
disappointed. I eventually made my way over the timing mats at the finish line
and into the arms of Bruce and Kevin, who had hurdled the fence at the finish
to get to us, having finished earlier in 10:28:28. I was later told by many of
my club mates that there wasn’t a dry eye in the Bedfordview Country Club
gazebo after they had just witnessed the agony of my near-finish. I was treated
for dehydration in the medical tent and vowed that very same night that I would
be back at Comrades 2012.

And so I found myself on the starting line in Pietermaritzburg once
again on 3 June 2012, praying that it was going to be third time lucky. I
really felt the pressure as many well-wishers told me that this was going to be
my year. Overall, I had a really fantastic race, despite some minor leg cramps.
I ran the entire way with Bedfordview Country Club members, I had tons of support
along the way and I was thrilled to bits when I got into the stadium and over
the line in 11:11. I thought I would break down at the finish, but in truth,
even though there were tears, my biggest feeling was an enormous sense of relief that I had finally finished Comrades. For the third year in a row, I
met my brother Kevin on the finish line and this time we were able to have a
hug of victory!

I was again treated for dehydration. My
medical treatment was an epic experience in itself, with me falling off the
stretcher on the way to the medical tent, then being put on a stretcher bed
whose leg collapsed, spilling me onto the ground for a second time, but I was
treated by a fantastic young doctor who was spending her birthday treating
fatigued Comrades runners.

Comrades 2012 was the culmination of not just getting the Comrades
monkey off my back, but rather, as one of my running mates put it, the hairy Comrades
gorilla! And this year my Bailer of the Year Award was replaced with the
Perseverance Trophy in recognition of my journey. Will I be back in 2013 to run
Comrades again? Absolutely! Maybe one day the four brothers will start a Comrades
together (come on, Trevor!). And to those mates – you know who you are – it is
now time for that Johnnie Walker Blue.