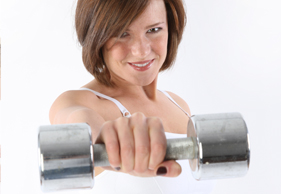 We all know
that aerobic exercise, particularly running, delivers many health benefits,
including cardiovascular fitness, muscle endurance and increased bone density.
For those people looking to lose a few kilograms, exercise is also an effective
method of weight control, with excess energy and fat being burnt up and more
muscle being formed. Even better news for weight-watchers is that a new study
has found that exercise may reduce appetite as well, for anything from two
hours up to a couple of days.

Now this may
not quite tally for everybody, as we all know at least one athlete who is
always hungry and eats like a proverbial horse in order to generate the energy
they need for their running. The logic there is that the athlete is burning so
much energy and must replace it by eating, but researchers are now saying that
exercise can reduce appetite instead of sending it sprinting for the fridge.

A group of
scientists at the University of Loughborough in the UK, led by Dr David
Stensel, investigated what effect vigorous exercise has on the levels of the
two important appetite hormones, acylated ghrelin and peptide YY. They did this
by asking a group of male university students to do 60-minute sessions on a treadmill
and 90-minute weight training sessions in the gym, then measured the levels of
these hormones in the athletes’ blood during and after the sessions, as well as
asking the athletes about their hunger pangs.

Ghrelin is
released by the stomach and pancreas to increase appetite, while peptide YY is
released from the stomach after eating to reduce appetite. Several previous
studies of the effect of exercise on ghrelin have come up with mixed results,
however, and Dr Stensel says that this is because there are actually two forms
of the hormone – active or acylated ghrelin can pass from the blood into the
brain and affect appetite, while non-acylated ghrelin cannot get into the brain
and does not affect appetite. Thus total ghrelin levels may be misleading in
the case of appetite suppression.

PROOF IN THE PUDDING

The study
found that vigorous treadmill running caused acylated ghrelin levels to drop
and peptide YY levels to increase, which both suppressed the athletes’ hunger. On
the other hand, the weight-lifting sessions led to lower ghrelin levels but
didn’t affect peptide YY levels, which explains why the athletes reported less
reduction in appetite. In both cases, these effects usually lasted for about
two hours, but in some cases longer.

Dr Stensel’s group
admitted that they don’t know why weight training affects acylated ghrelin
levels and not Peptide YY levels, but speculate that it may be because lifting
weights does not cause enough energy expenditure to affect this hormone. They
also say it may be because the disturbance of the gut caused by running is
responsible for changing gut hormone levels. Therefore, while they conclude
that more research is needed to ascertain the ideal intensity and type of
exercise for appetite control, they can still confidently say that working up a
sweat with a hard run is a great way to exercise while not boosting your
appetite to the extent of packing in more than you sweated out. And that’s
great news for all those people who are looking to control or reduce their weight.