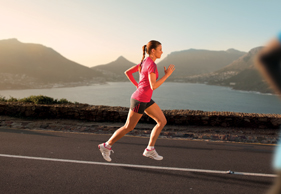 After
years of running up to 5km for general fitness, on top of yoga, gym, boxing and
other fitness activities, Nicolene Mostert recently began training for her
first 21km race at next year’s Old Mutual Two Oceans Half Marathon, and it’s
all thanks to her work as a photographic sports model for adidas. The
well-known sporting brand was recently announced as the new technical supplier
to the Old Mutual Two Oceans Marathon, and that saw adidas launch its Journey
to Two Oceans campaign – which they needed a ‘face’ for. And they chose Nicolene.

“I’ve
worked with adidas six or seven times over the last two to three years, and
have sort of become part of the adidas family, so they asked me to run the race
as part of their campaign due to me being the model in their shoots,” explains
Nicolene. “They offered to take me under their wing and train me for it,
because it will be my first half marathon, and it’s going well – I did my first
10km run the other day. My goal is to run a 1:50 at Two Oceans next year. The
big mental challenge for me is to learn to slow down and pace myself, because I
was always a sprinter at school.”

Originally
from Namibia and having gown up in Pretoria, Nicolene has lived in Sea Point,
Cape Town for the past seven years, where she works part-time as a model and
also does sports therapy massage at the Kranking Fitness Studio in the V&A
Waterfront. On top of that, that she is a single parent to daughter Belle (4),
so fitting in training is a challenge, but one she is enjoying. “Moving up to
21km as a 28-year-old single mom is not easy, but I am inspired by top South
African ultra-marathoner Adinda Kruger. I remember watching her train in the
gym when I still lived in Pretoria, and she only began running at 28 or 29, but
is now a top runner.”

“I’m
looking forward to seeing my running improve. There is a bit of pressure on me
now, but in an exciting, healthy way. I feel this is a massive honour to be
involved with a brand that I have enjoyed working for, as well as such a
magnificent race.”