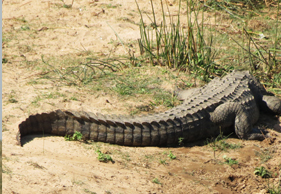 It started with my mate Mark Struwig phoning to say ‘my
running partner can’t make it any more, so would you like to come run in the
Kruger?’ I thought that sounded like fun, so off I went – and we travelled in
style, too, sponsored by Centurion Hyundai to transport a team of six
development runners that Mark has been grooming for some time. Little did I
know that amongst them was sitting the eventual winner as well as the second,
fourth and fifth place finishers – and we had the first grandmaster in our bus
as well!

Race sponsors SAB went all out, and a squad of game rangers
ensured the safety of all athletes during the race, travelling along the course
to herd off any big game. At the same time the SAN Parks helicopter lifted off
to ensure that no elephants, rhinos and lions got too close to the runners. And
so 1000 athletes lined up at the start on the ‘village green’ and we were set
off by a recording of a lion roar.

The route went out past the nursery school and towards
a steep climb on ‘Vossie’s hill’. It then stretched past the golf club and ran
up along ‘Lake Panic’ dam wall, where we saw hippo’s. After crossing the stream,
we went up ‘Rhino Hill,’ where runners were treated to superb game viewing, a
welcome distraction for tiring legs. The next 2.5km meandered back through the
village, and impala and baboons could be seen staring at the ‘herd’ of runners
going past.

Exiting onto the village entry road, the course
dropped back toward the starting point, and we had crowds of spectators lined
the road urging us on. The second lap gave runners another climb while the
route followed the fence of the elephant and buffalo bomas. After the loop, the
runners hit the Skukuza tar road again for a 4km stretch, and then made their
way through Skukuza Rest Camp and back down ‘Vossie’s hill’ to the finish.

Running in the park, I have never felt prouder of a
national heritage site! The route was tough, with about 70% off-road and with
lots of little hills over soft sand, but what a stunning setting for a race!