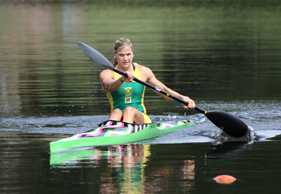 With the London Olympics done and dusted, South
African paddler Bridgette Hartley says it is all still sinking in as she is feted
all over South Africa following her third-place finish in the K1 Kayak 500m sprint
women’s final. Starting as one of the top seeds, Bridgette crossed the line in 1:52.923, behind gold medallist Danuta
Kozak of Hungary (1:51.456) and Ukrainian Inna Osypenko-Radomska (1:52.685). “I
remember the World Champs in Poland in May and the first to sixth placings were
just seconds apart, so I knew it was going to be close in London. I just
remember hearing beep, beep, beep at the finish!”

Having finished, she was
unsure about her final placing, looking up at the scoreboard, hoping for ‘South
Africa’ to blink in the top three. “I was excited when I finished, but I had to
calm down before I knew about a medal position for sure. I sensed my bronze, but thought there might be a photo-finish, and then
finally I saw it, and my coach was
in front of me and it was so cool to experience it. My parents and my step-dad
were also there to celebrate it with me, and it was my best moment as an
athlete!”

Gracious and humble, Bridgette says she had always hoped for a medal in the Games,
but never expected one. She was in good shape, though, and explains how she
“put her head down” and raced well in her qualifying heats and the semi-final.
“In the final, I was nervous but I had a race plan to focus on. I did not want
to be distracted by medals and even though I probably only got four hours of
sleep the night before, I was going into it with confidence.” Still, she
says watching the race now still brings back all the emotion of that day. “I get
nervous all over again!”

In the build-up to
London, Bridgette paddled twice a day and went to gym four times a week, as
well as doing morning swims, yoga and Pilates, training a total of three to
four hours a day, but she says her running was the foundation for her success. She
would do two main running sessions a week, fitting in 8km to 10km and focussing
on hills for strength, as well as shorter sprint and speed work sessions when
an event was around the corner. “Running helps me a lot, as you need all-round
endurance, and I’d only rest one day a week and cross-train to get fitness up. As
a top athlete, that’s your life.”

She also keeps strict
tabs on her diet, focusing on chicken fruit and veggies. “Your body needs to
feel right and if you don’t eat well, it will also affect your recovery,” she
says. “But balance in important, so I still sometimes indulge in a bit of chocolate…”

With London 2012 behind
her, Bridgette says her next big goal will be the 2013 World Champs in May. “It’s
short-term goals at the moment, and I want to enjoy a holiday before it’s on to
a new training season.” She also says that her bronze-winning performance has
already generated a great responses from youngsters who are now inspired to get
into paddling. “I hope, too, that I’ve inspired women, and I hope that it gives
room for us to develop athletes for the future.”