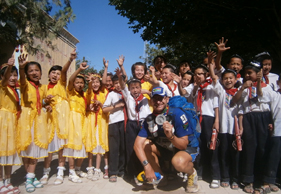 David Barnard was one of those runners who fell out of
love with the sport after a few years on the tar, but then the CEO of SANGONeT (Southern African NGO Network) discovered
multi-stage desert races, and rediscovered his love of running. “In the early 2000’s, I ran road races,
did Comrades, and it was all the same,” he says. “I had lost running for four
years, but at the end of 2009 I heard of the Kalahari Augrabies Extreme
Marathon and started up again.” He decided to run it in 2010 under the SANGONeT
‘No Pain No Gain’ campaign banner, to raise funds and awareness for NGOs, but
first he had to not only get running fit again, but also get used to running with
a heavy backpack filled with clothing, food and water, and in sand and high
temperatures. “You learn from your first time and you learn the tricks of the
trade,” he says.

Since that first desert
run, David has gone on to run several deserts around the world, and says his
running has brought him a sense of personal achievement. “Desert races bring a
new outlook to running. Some people think I’m crazy taking on these five to
six-day multistage races, but it’s great because there are no egos at events
like these. It’s about the experience, and people often do it for a cause.” All
the funds David raises through his running go towards helping SANGONeT provide
other NGOs in the country with services, advice and technologies. “It’s a hard
sector to get into – awareness is important and throughout my desert races we
profile a NGO daily to get the word out.”

In 2011, David went to run
in Egypt, and despite being better prepared, he fought both dehydration and
fatigue “I came back better trained for Sahara, but it took its toll on me. The
heat was really difficult and it drove me crazy. All you want is water. You
can’t sit down because it’s hot. You can’t stand still because of the heat
radiating above.”

Every 8km, heaven-sent
water points would hand out one-litre water bottles, and roving Land Rovers moved
amongst the runners to fill up water bottles as well, but David says there was no
choice but to keep running. “The sooner you finish your stage, the more time
you have to recover. I learnt to manage that well. But you also have to hold
yourself back, because usually on the final day, the route can be Comrades
distance!”

Having raised
R100 000 in each of his first two runs, David felt the campaign needed a
bigger and better challenge in 2012. “We had to expand the campaign – three
deserts on three continents, and reach R1 million in fundraising” he says. That
has seen him complete the Namib Desert Challenge in March and the Gobi March in
China in June, and now Antarctica in November is the last challenge for the
year. “It will be a challenge in the cold. When the Highveld had the recent bit
of snow, people asked me if I was running and I said ‘No, it’s too cold!’ Now
I’ll have to expect those conditions.”

David’s training
philosophy is simple: Run every day. “You have to get used to running at least
six days a week. I try and get up to 130km a week, work on core training in the
gym for the tough terrain and do weight-training for my quads so that when I
race with my 7kg backpack, I’ll be prepared.” However, David knows that all he
does during the events is vasbyt.
“You get blisters, and sometimes there is no shade, like in the Sahara, but I
know that I must just keep going. It’s my motivation! To think I link my day
job with running is a bonus.”

For more info on the
‘No Pain, No Gain’ campaign or to make a donation, go to www.ngopulse.org/npng or www.facebook.com/Sangonet.NoPainNoGain.