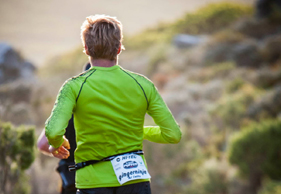 There’s an old saying that when the going gets tough,
the tough get going. In fact, they even wrote a song about it. And when it
comes to running up mountains, that saying really hits home, because mountain
trails have a way of finding a runner’s weakness and mercilessly beating the
runner up with it. Unless you’re Andre Calitz, that is. Then you just get
stronger and faster as the trail gets steeper and tougher – which is why he has
been setting course records left, right and centre in some of the country’s
toughest trail races in the last 12 months.

Also known as AJ or the ‘Ginger Ninja’ in trail
running circles, the 29-year-old won the 60km Three Peaks Challenge, taking
16 minutes off the previous record, and the Muizenberg Trail in another course
record time. He then blitzed course records on both days of the two-day
Grootvadersbosch Trail Run, and became the first runner to ascend Table
Mountain’s Platteklip Gorge 11 times between sunrise and sunset in the K-Way
Platteklip Charity Challenge. And most recently, he became the first runner to
break seven hours for the 80km Hi-Tec Peninsula Ultra Fun Run, or Puffer, from Cape Point to the
V&A Waterfront, despite terrible weather conditions that saw only the top
three runners go over the top of Table Mountain before all other runners were
re-routed along the contour path to bypass the foul weather. And also despite
the fact that Andre didn’t really know the best route to take…

“As a Puffer novice, I
didn’t know the route well, so I had to stick with the front runners. The
course is unmarked and there are numerous technical sections and short cuts and
specific checkpoints that I didn’t have a clue about,” says Andre. “Luckily Nic
De Beer and Will Robinson are both former winners and have a wealth of
experience between them.” Still, Andre broke clear at Constantia Nek, 60km into
the race, backing himself on the climb to Maclear’s Beacon, the highest point
on Table Mountain. “I was feeling really strong, so decided to make it count on
the climbs, which are my strong point. The weather was having a proper go at us
with heavy downpours and freezing wind! It was also very slippery, with low
visibility, which made things difficult.”

By the time Andre had
descended Platteklip Gorge and reached the lower cable station, his lead had
grown to more than 20 minutes, but he actually picked up the pace still further.
“I had no idea what my lead was, and I thought at any moment Will or Nic would
show up. I got lost again coming down Signal Hill, but I bushwhacked a path
down through stinging nettles, mud, grass and rocks, and by then I knew I had
the race in the bag.” Andre stopped the clock on 6:59:36. Ironically, he
thought the record was about 6:46, and didn’t realise that he was on course to
break it – he just liked the idea of going sub-seven hours! “Winning the Puffer was a great highlight. Other trail runs don’t have as much hype
as Puffer, which is known as the hard man’s race. It has a bit of reverence
around it, which made the victory all the sweeter.”

Andre hails from Stellenbosch, where he studied B.Com
Law after school and went on to complete his LLM Masters. After doing his
articles, he joined the Hereford Group, a Cape Town-based firm of financial
advisers and asset managers, where he is currently the in-house attorney. He is
married to Paulette and they live in Melkosstrand with their brown Labrador
Monty, who is Andre’s regular training partner. “Monty is an absolute animal in
training! I’ve taken him over Table Mountain and for three to four-hour runs,
done intervals, everything, and he just laps it up.”

Andre has been running since the age of eight, and in
high school he added cycling and then triathlon to his repertoire, going on to
win multiple junior titles at the All Africa Triathlon Champs, SA Duathlon
Champs, SA Triathlon Champs and SA Cycling Champs. “I was big and strong for my
age, plus the training environment in Stellenbosch, where I was surrounded by
pro triathletes, runners and cyclists, meant I was always going to turn in to a
bit of an ox! I used my strength to my advantage, pulling away on climbs or
staying with the seniors in the elite bunch and pulling clear of the other
juniors. But I’m a big guy and will never be able to run as fast as the top
triathletes in sprint and Olympic distance events, whereas I have the strength you
need for the long endurance events.”

And so, after completing his studies, Andre ran the
Two Oceans and Comrades ultras, winning silver medals in both, and finished the
Ironman. Then, in October last year, he says he got lucky in getting a late
entry to his first trail race, the 50km Hout Bay Triple Trouble, and now trail
running is his sole focus. “I have found that you can do trail running and still
have a normal life. I would love to do Comrades and Ironman again in a few
years’ time, but then I want to do them professionally and give them a good
walloping. I think I’m still a bit young, because you’re at your peak for races
like that at 35. Right now I do better in tougher, slower races, which is
probably why I have done better in mountain races. You need a different mindset
for trail running. I know guys who can run a 2:15 marathon on the road, but
after 21 kays of the Otter Trail they’re lying under a bush, while other guys
who can’t even break three hours for a marathon can just pound out the kays on
trail.”

NEXT ON THE AGENDA

Looking ahead, Andre says he would like to take on
more ultra trail races, like the Addo, Augrabies and Kalahari races in SA and
the Leadville 100 miler in the USA. In October he will also race the Otter
Trail Marathon, and he has a few ideas for new trail challenges, like ascending
the highest mountain in each province in the shortest time. He is also
exploring the option of turning professional next year. “My work hours are
currently flexible, but that’s still not enough to train fulltime. Don’t be
fooled by flexibility – it normally just means more work in less time.”

“Everything in life is about return on investment –
what you put in is what you get out. If you put time and effort into your
marriage, you will have a happy wife and happy life. Same with training and
racing: If you work hard, you will be rewarded. But that said, time on the trail
is never wasted – some days are hard, but it’s always great to be out in
nature, having a great time. It’s spiritual for me. I love to run up Table
Mountain and enjoy the quiet – show me anywhere these days that is really
quiet! That’s why it’s the mountain trails for me.”