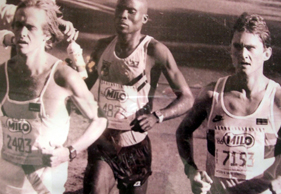 In a remarkable running career, Dan Biggs claimed four
Comrades gold medals between 1981 and 1986, and capped that with numerous podium
positions in both the Duzi canoe race as well as the old Transvaal Ironman
competition, making him one of the most versatile and talented athletes of his
day. “My running strength really paid off in canoeing races when the water was
low. In the 1981 Duzi, I ran for three hours and only paddled for 15 minutes!
It made for interesting races between the runners and paddlers.”

BITTEN BY THE BUG

Born in 1959 in Ixopo, Natal, Dan was the youngest of five
kids. At school, he didn’t like having to wait to be picked up by his mother
when his older siblings finished later, so he ran home instead, and from that
his love of running grew. His athletic career took off in 1978, the year after
he completed his national service, when he began studying at the University of
Natal in Pietermaritzburg. There he was coached by John Baxter, who he credits
for giving him the self-belief to compete with the best. Dan won the Natal
Marathon Champs in September 1980 in a PB 2:22:36, and the following January finished
second in the Duzi after a titanic struggle with Graeme Pope-Ellis, ran an
excellent 3:20 to finish sixth in the Two Oceans in April, and then decided to
run Comrades.

However, that year saw the Comrades organisers
incorporate the 20th
Anniversary Republic Day Festival into the Comrades programme, which prompted about
30 students from universities around the country to wear black armbands in
protest, including Bruce Fordyce and Dan. “For us, the Comrades
symbolised a celebration of the human spirit, so why involve it with the
Republic’s most infamous ‘achievement,’ Apartheid? Our black armbands did not
go down well with many people – for the first kilometre a tall Afrikaner swore
at me and became even more rabid when I told him to sod off! All the abuse I
received along the route just made me more determined to do well.” That
determination carried Dan to fifth position in 5:54:08 “It felt great to have had
such a good first Comrades and done my bit for the struggle at the same time.”

In 1982 Dan teamed up with
his Springbok canoeist brother Tim to win the Duzi pairs, then went into
Comrades hoping to do the double, but unfortunately picked up an injury six
weeks before the race and finished way off the pace. The following year he
finished second at both Duzi and Ironman, and 14th at Comrades, and
then in 1984 he repeated his two second places and got back amongst the
Comrades golds, finishing fifth in 5:47:11. In 1985 he claimed third, third and
sixth respectively, with a 5:57:55 Comrades finish.

“In 1986 I sacrificed the
Duzi and Ironman so that I could concentrate on the Comrades, because I
desperately wanted to win it, but I probably peaked about six weeks before the
race, and then I picked up a bad cold three days before the race. I was nevertheless
determined to give it my best shot. At 60km I was running with Bruce and Hosea
Tjale, lying joint second as we chased Bob de la Motte, but my stomach started
to feel dodgy. So when I saw a portaloo under a bridge, I decided to answer the
call of nature while I had the opportunity to do so in a dignified fashion! When
I came out of the loo, Bruce and Hosea were about 300m down the road and on the
day I was not good enough to catch them, eventually finishing eighth in 5:45.
While it was my best average pace of all my Comrades at 3:50 per kilometre, I
was devastated! But later I realised that I had done my best possible build-up
to the race and had fought hard on the day.”

Dan went on run six more
Comrades, the last in 2001, but says that when his competitive running days
ended, so too did his motivation to race. Today he works as a landscaper in
Cape Town and is father to two artistically and musically talented children,
Sarah (21) and Josh (18). “I loved the heat of
battle and always raced to win. That’s why I did not make a good transition to
social runner in later years, as running somewhere in the middle of the pack
simply did not do it for me. I still run most days on Table Mountain, which I
find excellent therapeutic soul food.”