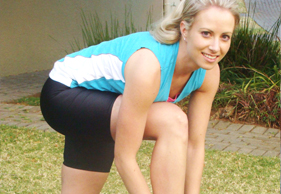 Did other club members make an
effort to mingle with you? Yes, from the very first time
trial I took part in. Since my running club is not all that large, it made it
very easy to mingle and meet new people.

From a single girl’s perspective,
do you get advances from the single guys in the club? Most
are married or involved, but there are one or two that I have noticed giving me
‘the look,’ and one has actually made the effort to come and chat to me. It really
motivates me to go to time trials in the hope that I see my new ‘friend.’

Have you ever dated anyone in
your club? Yes, but sadly it did not work out.

How easy is it to be sociable in
your running club? Everyone is very friendly and
helpful. They also have a hamburger evening every last Thursday night after
time trial, which is a great way to get to know healthy, fit people instead of going
out to bars and night clubs.

Does being married affect your
social life in your running and cycling clubs? I am very
social with all my club mates, both male and female alike.

Have you ever thought a guy in
the club is too flirtatious? Not at the cycling or running
clubs, whereas the gym tends to be more of a pick-up joint. Running and cycling
take a whole lot more effort and for a man looking for a girl it is way easier
to lift a couple of weights instead of running 21km or cycling 100km.

Which is more social, your
running or cycling club? I would probably say cycling, as
I know more people there, but I have heard that the runners are a rowdy, social
bunch too.

So can you see a difference
between the runners and the cyclists? The one
group is more focused, painfully aware of what they eat and weigh, and the other
is more social and not afraid to have a huge party the night before a race… I
will leave it up to you to decide which is which.

THE MATCH MADE IN A RUNNING CLUB – ANONYMOUS

Is being part of a club conducive to meeting
someone special? Being part of a sports club does enable you to meet
like-minded people who understand your lifestyle and share your passions.

How long did you belong to the club before
going on a date? One year.

Do you know of other couples that met like
you guys did? Yes, there are actually a few that I know who met this
way.

Did either of you go to the club to meet
people or were you purely focused on running? We both went mainly
for the purpose of running, but making friends was definitely a big aspect of
joining a club. I had not really thought of meeting a partner there.

Would you suggest to other singles to try meeting
people through a club? Yes, definitely. Having a partner who shares
your passion for a healthy lifestyle is very important. It also helps having
someone who understands why you want to get up at five o’clock on a Saturday or
Sunday morning, and supports you in all your crazy goals and ideas. Being able
to run and train together is a great way to share quality time together.

The Social Side of Things… from the Social Media

We asked
our readers on Facebook and Twitter if they have met their partner through a running
club, and to comment on the social side of being part of a club. Here are a few
of the responses.

Sally Hollick: We’ve been together
for more than six years now!

Liezel vd Westhuizen: Running is
the best way to meet people, everyone greets when you run past.

Debbie Osborne: Lol, no,
but I’d love too! It would be awesome to have someone to run with!

Maritza Hartkopf: Still trying to get
my loved one to start running…