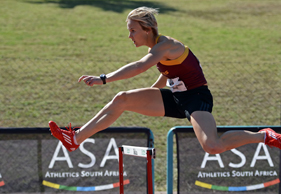 MA: The financial situation at ASA has been described as very serious
and CEO Frik Vermaak was recently fired following an enquiry into financial
mismanagement. What exactly is the situation and does the sport have any money?

JE: Things are tight and will be for
a few months, but we are working on recovering our financial strength. Since
2009 there have been constraints and by the end of last year we had stabilised
the ship. This year required financial prudence in everything we did. That did
not happen and we now need to watch every cent that is spent. This may involve
some structural changes and changes in the way we do things, but we will make
sure that we get everything back to normal as soon as possible.

MA: Several sponsors have withdrawn from the sport in recent years, or
look set to withdraw, including Engen, Old Mutual, Nedbank and Yellow Pages, sparking
fears that nobody wants to invest in the sport. Is this the case?

JE: Sometimes a sponsor does not
renew due to strategic decisions, other times because they are unhappy, but unfortunately,
when a sponsor does not renew a sponsorship everyone just says they pulled out.
For example, Yellow Pages’ contract ended at the end of the last season, and for
some reason people are saying they pulled out. Whether they enter into a new
contract or not depends on further discussions.

There is interest in the sport from sponsors. The
challenge is to meet both parties’ expectations before we finalise anything. In
some cases (thankfully only a few), sponsors believe they are buying the sport,
but the relationship is far more complicated. The sponsor is, usually, buying
the branding rights to a product the sport is offering. If the product is weak,
the sponsor will get less coverage and could spend their money better
elsewhere. If it is strong, the challenge is to correctly evaluate the price
for selling the rights. That is what we are busy with – determining what our
strongest products are and how we can strengthen them to be more attractive,
while also evaluating their worth correctly. That way we give more value to the
potential sponsors we are talking to while also ensuring that we get the
revenue we need to run the sport. The initial results will be seen soon, but if
we get the exercise right, then we will reap the benefits in a year or two’s
time.

MA: Controversy accompanied the final team selection for track &
field for the London Olympics, with some athletes going that had not met the
full selection criteria, while others in a similar situation were left at home.
How did this come about?

JE: The final team selection was done
by SASCOC. We presented the names of athletes and they made the final choice.
The one athlete who did not meet the requirement of two A-standard performances
did meet the exception made for 2016-potential. He made the World Indoor Champs
final in 2012 and is the African Champion, so he was hardly a surprise or
high-risk choice. He made the Olympic final and recently broke the SA record,
so it was clearly a good selection. We still feel that other names we put
forward should have been selected, but SASCOC obviously had their reasons for
disagreeing.

MA: Our athletes seem to be having an up and down time of things on the
world stage, so do you think we’re moving in the right direction in terms of
development of talent and coaching?

JE: In South Africa we have an
unrealistic idea of what constitutes success. We contested nine track &
field events at the Olympics and had six finalists. Hardly a failure! Then at
the World Half Marathon Champs, Stephen Mokoka came eighth, behind some greats
of the sport. In general, over the last two years we have been competitive. Having
said that, it is because our athletes are good, not the systems. We are busy
working with the IAAF to introduce their coaching qualification system here,
because coaching is an area where South Africa has fallen too far behind. In
fact, this has happened at all training levels – in technical officials and
administration as well.

We also need to look at our competition structure,
because I am not convinced it is contributing to improving the depth of our top
performers. Just take road running, for example: How many courses do we have that
are conducive to fast times? Probably a handful in the entire country. We also
have major prize money in minor races which are not well organised or on
difficult courses, which entice the top athletes to run them instead of
focusing on a few quick and slick events. It is great that our mass
participation model is strong, but our model at elite level is non-existent.

Also, the disjuncture between the schools programme
and the national federation is a major source of concern. Unfortunately, the
schools body has stated that they will not work together with us on a national
junior championships again. The only losers are the athletes. Government also
seems to be confused as to what its role is in this mess. Sorting it out has to
be one of our priorities if we want success in 2016 and beyond.

MA: Your leadership style has sometimes been described as autocratic,
and some people say you are unapproachable. How do you respond to that?

JE: There seems to be a misconception on the part of some
people as to how the system works. From the first day I was elected, I got
bombarded with people who wanted to meet with me about a range of issues, from
producing a TV magazine show to saying that they wanted to contribute if we
needed them. All of this was (and is) appreciated, but it is wrongly directed
to the guy at the top. On a good day I get about 20 phone calls and 30 e-mails;
on a bad one it can be as many as 100 calls and 250 e-mails. It is not possible
to deal with all of them. Most should be going to the person’s club or province
to deal with. Others need to be dealt with by our office.

The Board of ASA is not there to deal with matters on
the ground around the country – that is why we have clubs and provinces. Our
obligations are to give guidance and assistance to the provinces and to deal
with national and international issues. Also, the Board has to focus on longer
term strategic planning. Where people are playing obstructive political games,
they have to be left behind. If they then cry that what they call autocratic
decisions are being made, the answer has to be to ask whether they took the
opportunity presented to them to make their contribution when it was asked for.
We do not have the luxury of waiting for them anymore.

MA: Do you think the various players in athletics are pulling in the
same direction to rebuild the sport?

JE: It was inevitable that after many years of a strong
leader such as Leonard, there would be a jostling for positions when he left.
It was one of the unfortunate consequences of how the matter was handled that a
vacuum was created which led to people rushing for the top positions. It may
have seemed destructive, but at the same time it was natural and permitted the
sport to regain its shape. We have had three sets of elections in the past two
years and the competition for positions has become less and less during that
time, indicating a realignment and also a level of maturity entering the
equation. So, after two years of lots of different camps vying for positions,
the Board is pretty unified at the moment. The building can now start.

However, I have to add the caution that people
everywhere must also contribute to the fight to clean up the sport and not just
sit back and say that ASA must come and clean things up for them. That happened
earlier this year in KwaZulu-Natal. I was bombarded with complaints and was
called all sorts of things when I did not publicly intervene. We continued our
efforts out of the public eye to get KZN Athletics to address the concerns
being raised, but ultimately the clubs in KZN woke up to the fact that they had
to solve the problem themselves. They did and there is now a new administration
there. (Although it will be interesting to know if they have taken the steps
they wanted ASA to take.)

MA: What does ASA have in the pipeline in terms of plans and goals?

JE: It’s too early to disclose all the plans for the
future, but we already have a platform from which to grow. Few other sports are
practised in so many schools or have as many participants on a regular basis.
We just need to translate that into elite performances and we will be in the
top 10 athletics countries in the world.

Due to space constraints, we have left out the
question put to James on the formalisation of trail running, but we will cover that
in an upcoming edition when we speak to Altus Schreuder, the convenor of the
ASA sub-committee on trail running, which is currently working towards
establishing a national plan for trail running, with input from trail running
athletes, organisers and partners.