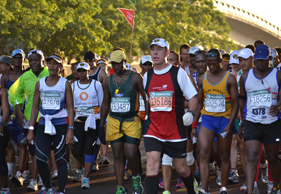 Back in 1902, the Stella Sport Club was established as
a soccer club, but over the years its members began looking for different ways
to keep fit. That saw the founding of the club’s athletic section in 1970, and
from a small initial membership it has grown into the 350-strong running club
of today. And Stella is for every type of runner, says Grant Matkovich, the
club committee member responsible for fundraising and entertainment. “Stella AC
has a hectic weekly diary, so no matter what your ability of running, you will always
find a run to suit you.”

Based in the heart of Glenwood, Durban, Stella runners
take off on early morning training runs from the club every Monday, Wednesday
and Friday. Afternoon runs start from 5:15pm on Tuesdays and Thursdays, with
four groups taking part: walkers, beginners, intermediate and fast. “The route
is called and water points along the way allow everyone to regroup to make sure
no one is left behind!” explains Grant. “A Wednesday ‘quality’ session has also
been introduced, to help those members who want to up their speed, so no matter
what age, body shape or running ability, all are welcome at Stella!”

Saturdays at Stella is ‘Gillies Day,’ a regular 6am run
which always draws an enthusiastic crowd. This social run started back in 1970
with six soccer players who’d all finished their competitive soccer careers and
didn’t know what to do next, but knew they wanted to keep fit. The run was led by
Gilbert ‘Gillie’ Patterson and followed a dedicated route from the clubhouse to
the beachfront and back, covering 13km. No matter what the weather, there will
always be someone running ‘Gillies’, says Grant. Also, the last Thursday of
every month is time trial night, with a 5km or 8km option. Once the time trial
is completed, the charcoal is lit and the music is turned up for club night,
giving members a chance to socialise.

As with any KwaZulu-Natal club, Comrades is a huge
event on the club calendar, and Stella had the largest contingent of Comrades entries this year for a KZN club (and
the seventh-largest amongst all SA clubs). “Our afternoon running groups
help to develop a novice runner under the guidance of fellow members, who are
always more than willing to offer advice when it comes to Comrades.” says
Grant. “Possibly the best advantage of running Comrades for Stella AC is the
fact that you are running for one of the biggest and most recognisable local
running clubs.”

Six weeks before Comrades, Stella organises a 60km
club long run along the Comrades route, either up or down, depending on which
direction the race is due to be run that year. The run allows club members to
familiarise themselves with the route, eliminate any nasty surprises and
hopefully gain some confidence before the big day. On the day, the route is
manned with six Stella tables where runners are able to drop off any goodies
they want on the route. The club’s own Thulani Zwane successfully also led a sub-12
hour bus home in this year’s race, and he dubbed it the ‘People’s Bus’.

While Comrades is a huge focal event, the club also
hosts other events each year, the Stella Royal 25km run and 10 km that is held
in March, and the Stella Tribute – NO to Violence 15km, which is held in
November. Both races are long-standing events on the KZN
race calendar, taking runners through the Glenwood, Glenmore and Umbilo areas, and
are well supported by other KZN clubs. Stella’s annual Pub Run happens in
December and is a training run with a difference: Refreshment stations are all inside
local pubs as runners make their way around the neighbourhood.

Stella is also focussed on giving back, by helping
with development athletes in sponsoring licence numbers, running kit, race
entries and lifts to races. Money for this is covered by a lot of the club’s
fundraising activities. There is also plenty of support within the club for all
members, says Grant. “Running is often described as an individual and lonely
sport, but Stella AC helps remove the loneliness from the sport. If a member is
seeking advice on an injury, what training to do, or which race to enter,
someone will be able to help them out, whether it’s at the club, on a run, or
on Facebook!”