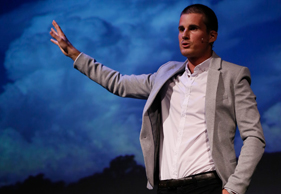 There were plenty of “Ooohs” and “aaahs” from the audience at the
annual FEAT (Fascinating Expedition & Adventure Talks) event early in
October in Johannesburg, as the panel of guest speakers took turns to present truly
inspiring seven-minute talks on their adventures:

?
Ed February: With 30 years’ climbing experience on more than 200
routes, Ed spoke about mountaineering back in the day without today’s technologically
advanced equipment.

?
Elizabeth de Speville: In 2011 Liz read
about the Camino
de Santiago walk in Spain online, started walking regularly for training, and
is now a firm believer that the only way to see a place is to walk it!

?
Elsie Bezuidenhout: Her mountain journey started with Kilimanjaro,
then she climbed Aconcagua and Erebus, which motivated her to climb the highest
peak on each continent and join the Seven Summits club. Only Everest remains…

?
James Lea: Together with his friend Mark Yetman, James went
on what became known as the ‘Big Ride Africa,’ taking in 19 countries and
clocking 15 458km over six months.

?
James Pitman: He was one member of the three-person team to
fly their South African designed and built light aircraft, Sling 4, around the
world, including a 30-hour flight across the Atlantic Ocean.

?
Keith Jones: The amusing adventure of a yacht master managing
a dismasting in the Caribbean, blowing his engine in Patagonia and again in the
Falklands, and recording probably the slowest crossing of the Southern Ocean.

?
Martin Dreyer: After discovering there is more
to life while working on a commercial fishing boat in the icy Pacific Ocean, he
not only won numerous Duzi Canoe Marathons and the Land Rover G4 Challenge, but
also established the Change a Life Academy.

?
Rob Thomas: Having grown up on the slopes of Table Mountain and Devil’s
Peak in Cape Town, Rob has many stories to share about the adventures of being
a mountain rescuer.

?
Christo Smeda: After winning the sponsored
adventure prize at FEAT 2011, Christo took his friends Regardt Botes and Flip
du Plessis and circumnavigated the island of Zanzibar on Stand Up Paddle (SUP)
boards.

FEAT organiser Lisa de Spellville then announced a surprise bonus speaker,
solo adventurer Davey Du Plessis, in his first public appearance since his traumatic
near-death ordeal on the Amazon River in South America. Davey had set out to cycle
from Arequippa to Chivay in Peru (145km, mostly uphill), followed by a five-day
hike to the source of the Amazon on Mount Misimi, then cycle 465km to Crusco
and finish off the adventure by paddling 4 500km to the mouth of the Amazon.

With the gruelling bike legs behind him, Davey gave his bike away and
set out on the paddling leg. However, the rapids were far
bigger than he had expected and his kayak was too fragile, so he stopped at Quillabamba
and purchased a tractor tyre as replacement! More worrying was the fact that
there had recently been 30 kidnappings in that area, allegedly by a drug cartel
operating in the area. Davey had seen local people by the river, who seemed intrigued
by his appearance but never posed a threat, until he came across some kids that
initially also seemed harmless. Suddenly he heard gunshots and felt numbness in
the back of his neck, then fell into the water. “My arms felt like they were no
longer part of my body, and it was almost a peaceful feeling drifting
underneath the water with my eyes open,” he says.

Once he
regained his senses, he managed to get his head above the water, where the
shots were still coming, then clawed his way onto the riverbank. “I was waiting
for what I thought was death,” he says. Then instinct kicked in, making Davey
get to his feet and run for help. When he saw locals after about 5km, he tried
to call for help, but with a bullet lodged in his throat, no sound came out. Then
they wanted money in return for helping him, but Davey had no money left…

After
being left to lie in a boat for four hours, Davey started coughing blood, which
fortunately sparked some urgency amongst the locals, and he was passed from one
tribe to the next until he reached a hospital in Pucallapa, where X-rays showed
that he had been shot in the head, neck and chest, with bullet fragments lodged
in his lungs and heart. Davey underwent successful surgery to remove the bullets,
but the shrapnel in his heart will need to be closely monitored for the rest of
his life. “The greatest message to have come out of this whole
incident was seeing how people from all over the world managed to connect and
offer assistance that ensured my wellbeing,” says Davey.”