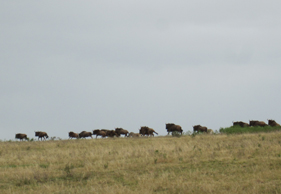 Ever heard of Botlierskop Private
Nature Reserve near Mossel Bay? Neither had I.
But this was the majestic location for the Save the Rhino Trail Run. This 3000-hectare reserve boasts 26 species of wildlife, including rhino,
elephants, lion, wildebeest, zebra, giraffe and buffalo, and over 200 species
of birds, and I suspected we were in for a great experience – especially when head
game-ranger Billy suggested during briefing that if charged by a Rhino or other
wildlife, we must simply make loud noises and try to look as big as possible!

We set off after lots of
encouragement from event organisers Hano and Sonja Otto and Modern Athlete’s Sean Falconer, the
event’s MC. In spite of being a chilly six degrees, we warmed up quickly on the
steep track to the lion enclosure, where we were greeted by the spectacular
sight of lions eyeing the colourful array of slow-moving ‘meals in running
shoes’, just yards away! So enthralled were we by these majestic creatures that
we missed the bright orange ribbons indicating a turn-off. Cue detour 1, which
saw us descend a steep jeep track rather speedily, followed by a U-turn and a
rather slow, sheepish ascent to get back on track.

Next we found ourselves weaving along
beautiful single-track and crossing a multitude of ankle-deep rivers, and merrily
waved on by a marshal in front of a closed gate, amidst grateful cries of “Thanks,
marshal!” A kay or so down the road, doubts set-in: Where were those guiding
ribbons? After a 2km detour, we headed back to ask the marshal where we had
gone wrong. Let’s just say that there was a marshal-technical error… Once the
gate was opened, the runners were free to continue the adventure. At one stage
I was literally stopped in my tracks as a herd of wildebeest and mountain zebra
hurtled by. “This is like the Serengeti,” gasped a fellow runner. A few kays
later a placid-looking elephant sauntered towards me, and I stopped to stroke
its trunk. This was a day I would not forget!

After a bit more bundu-bashing
down rocky single track, running across meadows and finally along gorgeous
mountain contour paths, I gratefully descended to Botlierskop. On checking my
Garmin, I realised I had clocked an extra 8km on the detours, but I wasn’t too
stressed, because this event was all about the experience.

With spirits revived after some
R&R, we were all set for Day 2, but as Hano said, you can’t visit this
reserve without summiting Botlierskop! Fair enough, although 2km into a rocky
climb, grasping an electric fence for support – yes, it was turned off! – I thought,
“This better be a damned good view!” It didn’t disappoint. The second day was
thankfully devoid of detours, and we ran past grazing impala and gemsbok along
the way. Finally, the elephants roaming near the finish-line were a fitting end
to an amazing African experience. So whilst my weary legs were battered from
the thorny vegetation, my spirit was revitalised and I had a truck-load of
wonderful memories.

James Brown: Everything was an adventure; from starting the race next to free-roaming
elephants, to avoiding charging wildebeests en route!

Malcolm Collins: It was way more than
a trail run, more of an adventure. Definitely a run to do again.

Sue Ullyett: This is a trail run to put on your bucket list, and it’s for such a good
cause, to save our precious rhinos.