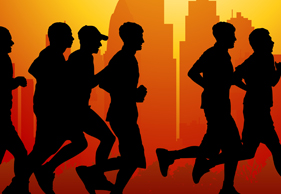 There are six events in the 644 Series and each event
is run over 6.44km. Runners start at timed intervals, depending on their
predicted finishing time, so while you are running you are being ‘hunted’ by
the faster runners and at the same time you are ‘hunting’ the slower runners,
with all entrants racing to get to the finish line first. The first event was
held at the Waterfall Country Village in Midrand in early September, and it
proved an exceptional venue. The run was within the safe environment of the
estate, with excellent marshalling and no traffic to contend with, but it was a
bit dark in some spots and I recommend you wear a headlight.

My handicap was 14, which meant that I was expected to
finish 14 minutes behind an Olympic runner, and my start leg was 31. At exactly
7pm the slowest runners started. Thereafter, the “hunters” left the starting
blocks in minute increments until the last runner, Leon Baker of Breakthru
Midrand, set off at 7:41. I started at 7:31pm in a group with three other
runners, and this was a great speed incentive from the start, as I pushed to
stay with the group. It was a great feeling catching up to slower runners – and
admittedly not such a great feeling when faster runners caught up to me! But
this in itself was also great incentive as I tried to stick to the faster
runners for a while. In the last kilometre my lungs were burning, but I crossed
the line in exactly the time that was predicted for me, which was a great
feeling! I would love to go back, though, and push myself even harder to beat
my predicted time. In a rush for the finish, it was Brandon Doyle of team Convergence
and Wanda Vogel of Team Meerkat who took line honours.

The 644 Series is for everyone, from walkers to
runners, from slow athletes to the elite. There is also an innovative team
system that allows runners to pit their skills against club mates, work
colleagues or friends, to earn the right to wear the coveted yellow polyshorts.
Come and join the Modern Athlete team at the next events in the series:

Entries are available at www.644.co.za, and timing
will be done by Peak Timing using ChampionChip.