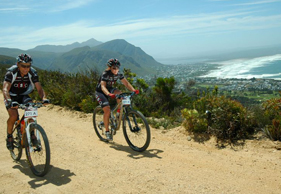 After completing his first Sani2C in 2006, avid mountain
biker Johan Kriegler was determined to host a similar multi-stage race in the
Western Cape, so in 2008 he approached local sports marketing specialists
Stillwater Sport & Entertainment and the Wines2Whales three-day mountain
bike stage race was born. The inaugural event took place in November 2009 and
attracted 300 riders. By 2010 word of the Wines2Whales had gotten out and a
spectacular field of 1100 riders signed up to be part of the experience, with another
300 riders on the waiting list! This saw the organisers split the field in 2011,
with the introduction of the slightly more relaxed Wines2Whales Adventure, so
that more riders could be part of the experience. Both the 2011 Wines2Whales
Adventure and Wines2Whales Race attracted a field of 850 riders each, with another
400 riders on the waiting list!

This year both events will see 1100 eager riders per
event flock to Lourensford Estate in Somerset West for the start of a mountain
biking experience like no other. The event will once again feature a new venue
for the Race Village, at Oak Valley Sports Field in Elgin, Grabouw, and riders
will cross 13 wineries, 26 private farms, six mountains, historic roads and
mountain passes, and nature conservation areas (including the Kogelberg
Biosphere), before finishing within sight of the famous whales of Hermanus.

“Our main objective is to continuously develop the Wines2Whales
routes. We are proud to say that over the past three years these routes have
become legendary within the mountain biking community. Each year it is our
mission to increase the scenic level of our routes, while raising the fun bar,
so a structure such as Pofadder, a 100m wooden trail structure that runs
between cliffs and a waterfall, has become infamous amongst riders, both locally
and internationally,” says Johan.

“This year we’ll add Magic Mountain, Corkscrew,
Boomslang, which is two 20-metre steel structures that run through trees, four meters
above the ground, and Big Dipper, a 100-metre structure that runs over, along
and around the Eikenhof Dam. These structures, plus 25 bridges, the longest of
which is 30 metres in length, the 600-metre pallet along the Onrus beach
crossing, as well as kilometres of flowing single track wrapped between
mountains, vineyards, orchards and fynbos biospheres, dam wall crossings,
rivers, cliffs and the ocean, will once again create one of the best mountain
bike experiences in the world.”

The
trails are built and maintained by Cape Trails, a group of four previously
unemployed youth from Grabouw that have been funded by Wines2Whales since 2010,
with additional funding from the Pedal Power Association. In the past, these
four intrepid trail builders often had to walk to work if Johan could not give
them a lift, as they only had broken bicycles without brakes, but Johan tells
how this all changed recently. “A friend at King’s Cycles in Worcester had a
customer who had four mountain bikes and helmets that he was willing to trade
for a Wines2Whales entry, so as of 1 June this year our Trail Builders have
been cycling to work.” The foursome now take their bikes out on the weekends to
make full use of the trails they’ve built, and it’s no surprise to hear that
they all hope to race the Wines2Whales in the near future.

For more information
on the work of the Cape Leopard Trust, go to www.capeleopard.org.za
or www.facebook.com/capeleopard.