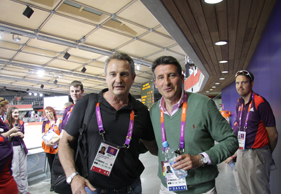 At the recent Olympic Games in London, former South
African 110-metre hurdles champion and record-holder Wessel Bosman (54) did a
presentation to the IOC about winter sport in southern Africa and then found
himself talking to people like London head organiser Seb Coe, and Prince Albert
and Charlene Wittstock of Monaco, about his vision for a sports university in
the middle of Lesotho. “I went as a guest of the Lesotho Olympic Committee and
had a VIP pass to get into all the events, and I met so many
people that see the value of high altitude training in Lesotho, especially
given that it is in the same time zone as Europe.”

It all started in 1998 when Wessel went to the Winter
Olympics in Nagano, Japan. He’d never seen snow before, let alone skied, but he
took the ski lift to the top of the mountain, and then proceeded to take five
hours to come back down again! “I met a Japanese skier and told him I had never
skied before, so he told me to rather use the service road that circled the
mountain to get down again. When I asked him what to do if I wanted to slow
down, he just said ‘snow plough!’”

When
he got back from Japan, Wessel came up with the idea to start a ski resort in
Lesotho, having found out that a number of South Africans regularly went there
to ski, so he negotiated a land lease with the Lesotho government to establish
Afri Ski. “What I didn’t realise at first was that that building a lift isn’t
enough – you also need a restaurant, toilets, equipment, etc. Luckily I was
joined by passionate people and it all worked out. I believe it was just meant
to be – I started with R5000 and an idea, and today it is worth hundreds of
millions, but these days I’m just the guy that cleans the snow, because I sold my
shares and let the business people take it further.”

“I
also realised that high altitude training was possible there at 3200 metres
above sea level, so right from the beginning I said it had to be a full-year venue,
to include running, cycling, etc. See, I was not just a crazy guy starting a
ski resort in Africa!” Nowadays some of Lesotho’s top runners base themselves at
Afri Ski, including Mamorallo Tjoka and Tsepo Ramonene, who represented Lesotho
in the London Olympic Marathon. Wessel sponsored them and accompanied the
Lesotho team to the Games as a guest of the Lesotho Olympic Committee, which
gave him the opportunity to share his ideas with some of the most influential
people in world sport.

Wessel grew up on the family farm near Vivo in the Far
North, then joined the Police Force in Pretoria, where he established himself
as an athlete. Between 1979 and 1989 he won the SA 110-metre hurdles title
three times as well as the 100m dash title once, helped set two 4x100m relay SA
records, and he held the SA record for the 110m hurdles for nearly 17 straight
years – except for one week in 1988. After hanging up his spikes for good,
Wessel dabbled in building wooden houses before heading off to Mozambique for
three years to trade in prawns. Next he imported cars to Swaziland and Lesotho,
and then found himself starting a ski resort.

In 2005, with just one week’s planning, Wessel and
his late son Johan hopped on their motorcycles to ride the ‘Cairo to Cape Town
Winter Olympic Drive,’ and they proceeded to do the trip in 19 days and break
the trans-continental record by one day. Next he decided to ride solo through
West Africa, but fell and broke his leg and shoulder in Angola. “When they took
my boot off, my lower leg was just flapping around, so they splinted it with
pieces of wood and loaded me on a bakkie and took me to the nearest clinic,
50km away.” He was airlifted out by an Angolan army helicopter and returned to
SA, where he underwent various operations. “I was desperate not to lose my leg,
so when I heard about a friend who had almost lost his leg but had a miraculous
recovery after sessions in a hyperbaric chamber, I immediately went for it as
well. Without that I would be in a wheelchair today.”

Despite
his leg still giving him pain, Wessel has not slowed done one bit, and is still
brimming with energy and campaigning for true winter sports to be established
in southern Africa. So who knows, maybe some day soon we
will have a South African bobsledding team…