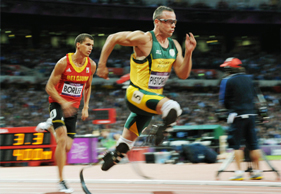 It’s perhaps hard to believe now, but not so very long
ago, 25-year-old US-based SA 110-metre hurdler Lehann Fourie was seriously
thinking about retiring from athletics and returning to South Africa to start a
career in business. He felt he had worked so hard for so long to find success
in the high hurdles, getting to the IAAF World Champs in 2009 and 2011 as well
as the World Indoor Champs earlier in 2012, but kept picking up niggly injuries
every time he got into good shape, so he decided the 2012 Olympics would be his
last big meet before he hung up his spikes. Then he picked up a serious injury
in mid-season and saw his chances of going to London slipping away, but just in
time he got back into action and was unexpectedly included in Team SA. And boy
did he grab the opportunity! Next thing he knew, he was finishing seventh in
the Olympic final – and all thoughts of retirement were long forgotten!

“I had a great indoors season earlier in the year and
got to World Indoor Champs 60m hurdles final, then I ran 13.31 in Florida for
my first qualifier – we had to equal or better 13.52, so I was in great shape,”
says Lehann. “I came home for the SA Champs and won in a high 13.5, so didn’t
qualify yet, but then I pulled a hip flexor in training. The doctor said rest
10 days, so I gave it 14, but I still hurt it again. I was out for eight weeks
after that and knew time was running out to qualify, so with just three weeks
left, I went to the Netherlands, got patched up by a physio and desperately
tried to qualify.”

“I had lost my base fitness, but there was no time
left to practice… I just started racing, three times per week in small meets
across Europe. I started with a 13.7, then a 13.5, and won the African Champs
in Benin in 13.60, but couldn’t hit that A standard, because I didn’t have any
rhythm. Then somehow ASA convinced SASCOC to include me in the Olympic team. I
was really surprised to be selected, and thankful, because I know some other
very deserving athletes weren’t given the same opportunity. Some people said it
was unfair for me to be selected, that I didn’t deserve it, and that started
affecting me, so I disconnected from Facebook and the media.”

MAN ON A MISSION

Lehann went to London with a point to prove, and says
he initially just wanted to run sub-13.52 and prove that he could do it. It
really didn’t help his confidence when he fell ill a week before his first
heat, and he was still on antibiotics when he ran, but says that was perhaps a
blessing in disguise, as he was forced to rest and probably went into that
first race much more rested than he would have been. He duly clocked 13.49 to
qualify for the semi-final round. “I went into the semi more confident and ran 13.28,
a new personal best and just 0.02 outside the SA record, and made it to the
final round! At the time I thought that’s the fastest I will ever run, but
after watching the race, I realised I had hit three hurdles, which slowed me
down, so I know I can go faster.”

In the final, bad luck struck again as Lehann tangled
arms with the British hurdler in the next lane, causing him to lose rhythm and
hit one of the early hurdles really hard. “I tried to get my rhythm back, but
it’s hard enough to make it back in a normal race, let alone an Olympic final! Still,
I never even expected to make the final, so I was very happy with seventh.
Before the final I stood there on the track and realised I was one of just
eight guys in contention for a medal – but it would be so much better to stand
on the podium, and getting so close has inspired me to work harder for 2016.”

Lehann started running the high hurdles at 16, but
says he didn’t really enjoy the event until he was 18, because other sprinters
were initially faster. “I was fairly tall and thus did better as the hurdles
got higher.” He won the SA School Champs title and bronze at the Africa Junior
Champs in 2005, and the following year went to study at the University of
Potchefstroom, in order to train with then-SA Champ Shawn Bownes. He was
spotted by a talent scout from the University of Nebraska-Lincoln at the SA
Champs and offered a scholarship, which he took up in 2007, doing a double
major in international business and management, on top of his training.

“It was really cold in Nebraska, and I found the first
year very frustrating, because it was tough being away from home and didn’t
feel like I was getting results, despite the hard work in training, but I stuck
it out and it got better. I liked the university, and the athletic programme
was really good. We had guys to help us with everything – we even had guy to
set out hurdles for us in training, whereas in SA we always had to do it
ourselves. It was good to get out of SA and get some world experience, and
while it doesn’t suit everybody, I highly recommend SA athletes go if they get
the chance,” says Lehann, who moved to North Carolina and a new coach in 2011
once he had finished his studies.

ALL FIRED UP AGAIN

Lehann came back to Pretoria for a week’s holiday
straight after the Games, before returning to Europe to participate in three
Diamond League meetings. Prior to his injury he had received several invites to
top meets, including some of the Diamond League meetings in the Far East, but was
forced to withdraw. Now, thanks to his Olympic performance, he says his agent
is once again receiving invites for him from top meets. He says he is also
getting fan mail and other requests he never received before. “I’m still in awe
of what has happened to me. I’m receiving messages saying I am an inspiration, and
being asked to go speak at schools, so yes, I think this will change my life a
bit, but it won’t change me. I’m really blessed by what has happened the last
few weeks.”

However, he is thinking of coming home from the US
now. “I really miss SA and can’t see myself staying in the US for another four
years. I miss my family and friends, and I want to settle down and get married
here eventually. There are also a lot more business opportunities for me here,
where I can start small and get experience while still focussing on athletics,
because I won’t be able to work full-time with daily training and travelling to
meets.”

With that
said, Lehann says he is really looking forward to the next few years. “Shawn Bownes
broke the SA record when he was 30 years old, and the high hurdles is a really
technical event that takes years to get right and for your body to develop to
its full potential. At the next Olympics I will be 29 and I think I will be in
even better shape then. I’m no longer feeling pressure, like I need to prove
myself, because London really gave me new belief in myself. I told myself
before the semi-final that I had 13 seconds to change my life and I literally ran
as if it was my last race. I was shocked to make the final, but I felt maybe I
can be one of the best in the world. Now I want to go out there and do that.”

Here’s to our Heroes

The South African
Track and Field team may only have brought home one medal from the 2012 London
Olympics, Caster Semenya’s silver in the women’s 800m, which is on par with the
single silver won by Khotso Mokoena in Beijing 2008 (and South Africa’s only
medal of those Games!), but we had a number of athletes that made the finals of
their events, which bodes well for the future of the sport and gives us great
hope for upcoming World Champs and Olympics!

4th in the
women’s javelin

8th in the
men’s long jump

9th in the
men’s decathlon

And a special mention
for Oscar ‘Bladerunner’ Pistorius, who
became the first Paralympian to compete in the Summer Olympics, not only making
it through his first round heat to run in the semi-final of the men’s 400m, but
then also joined Willie De Beer, Shaun De Jager and LJ Du Plessis (Following the withdrawal due to injury of Ofenste Mogowane) in the 4x400m team in
the final, where they finished 9th in a season best time.