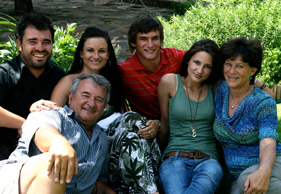 As many young South African boys do, Abrie Griesel dreamt of one day wearing the Springbok jersey and playing for his country. From a young age, he ran around on the family farm in Springfontein in the Free State with a rugby ball, and never missed watching a single Springbok rugby match with his family, who are all avid Springbok supporters. “My father, Jan, played rugby at a provincial level and passed on the love of the game to me,” says Abrie.

His rugby career really took off when he attended one of the country’s leading rugby schools, Grey College in Bloemfontein, and in 2010 Abrie was selected for the Free State under-18 team for the Academic Week, where he was scouted by the Blue Bulls franchise and moved to Pretoria. That saw him offered a bursary to study at Tuks, and after a few trial games he was selected to play scrumhalf for the under-19 Blue Bulls squad. That in turn led to him being selected for the South African team, the ‘Baby Boks,’ for the Under-19 World Cup recently held in South Africa, which the home team went on to win!

Abrie says it took a lot of hard work, discipline and extra training to get to this level in rugby. “Firstly, I think what it takes to make it is believing in yourself that you can make it. I knew that God gave me this gift and what I do with it is my gift back to him, but it still took extra training in my own time. My running fitness had a lot to do with getting into the Baby Boks team, and I believe it also had a lot to do with my healthy lifestyle, which includes plenty of rest and good nutritional habits. It was overwhelming, yet exciting to play at this level.”

RUNNING REQUIRED
Playing provincial-level rugby requires an immense amount of fitness training, especially for a scrumhalf, who has to be quick off the mark to get to every breakdown in order to link the forwards and backs, so Abrie says running, especially speed work, is the most important part of his fitness training. “We do a lot of 20-metre, 50-metre and 100-metre sprints, mostly done in sets of 10. This is mainly for fitness and speed performance on the field. Also, during team training sessions, the conditioning coach sets out cones on the field in a specific way to improve our agility, acceleration and speed over different distances while we are running.”

“Longer distance runs are also important, as they improve our stamina and help us to stay focused on the field during a game. This includes a regular 3km to 5km run which we have to finish in a given time according to our positions. We also do a run that we call ‘20 minutes of Fun,’ which includes 50-metre sprints alternating with a 50-metre jog around the rugby field.”

Sport has always been part of the Griesel family make-up. Abrie’s sisters Marli and Janette also excelled at sport at school, and they try to make it to all his matches to support their little brother. “My parents were also so inspirational. My father taught me from a young age to never give up, and always give that little bit of extra effort, and my mom always reminded me to go out and enjoy each game, despite the outcome.”