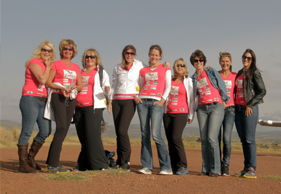 Getting
up early to run is hard enough, and when you have to be up at 1:30am every day,
then it must be even harder, but 5FM presenter Nicole Da Silva still manages to
fit in regular runs. “Believe me, if I can find the time, anyone can!” says the
popular radio DJ. Every morning at 3am, Nicole’s fun and conversational
personality hits the airwaves. She’s comfortable behind the mic, a testament to
her experience on a string of community and national radio stations which all
began when she was at university. Listening in as a BSc student at RAU, Nicole decided
to tackle the broadcasting world, “I knew I could do a better job and
auditioned and got in. I couldn’t believe it. Radio just happened for me.”

While
presenting at UJ Radio, Nicole also worked on air at VCR, a community radio
station, as well as Pick n Pay corporate radio. “It was all at once, but didn’t
clash. It’s there that I was taught all the basics,” she says. Then in 2007
Nicole got her big break when she joined Radio 2000’s popular breakfast show
with Ray White. “I couldn’t stop shaking in my first show, which is a good sign,
because that means it matters!” Three years later Nicole joined 5FM to host the
3am to 6am slot, and after each show, she gets a few hours sleep before her day
job as Wits Radio’s Station Manager begins, where she is managing and mentoring
young DJs. “I get to work on young presenters’ content, presenting and
delivery. There’s a lot of training and it’s quite stressful, but I love doing
it!”

Always
active when she was younger, Nicole played netball, volleyball, touch rugby and
softball, but didn’t think she’d tackle endurance running. After school, however,
she spent a ‘gap year’ in the
and says she put on some weight. When she returned, she decided that running
was the best way to lose those kilo’s. “I entered myself in the Spar Ladies’
5km, and I did it in 38 minutes – my goal was 40 minutes, so I made it and I
didn’t die! Suddenly I was thinking bigger and I progressed to 10km, 15km and then
half marathons, and that still blows my mind! I’m not built to run, but I went
for it. Just look at race days – there are all shapes and sizes! It’s all in
the mind in the end.”

She
took on her first 21km at the Old Mutual Two Oceans Half in 2011, finishing in 2:36.
“I was a rookie, taking in only water and no electrolytes, so by the end I was
done! I learnt the hard way and after the race I was taking in so many M&Ms
and bananas.” She did things right when completing the 2012 Two Oceans in 2:38,
despite the mud and rain, and was a much happier athlete afterwards. Looking to
the future, Nicole says she is still prepared for new challenges. “I’d like to
say that I‘ve done a Comrades before I die, and because I love travelling, I’d
love to do the Paris Half Marathon.”

Nicole
runs three times a week as well as some weekends. “It’s not an optional thing –
what’s the point if you give yourself the option?” says Nicole, “I run for me.
It’s mental-time, it’s ‘me’ time.” She has also adjusted her diet as it helps
her running when she feels lighter. “I never want to feel heavy on a run. I
don’t do pastas or breads, rice or potatoes, and I try stay away from processed
foods.”

In
June, Nicole spent a few weeks in and ran the Safaricom Half Marathon, a real safari-style
race. With eight other women from , she
joined Team Celebrate Life who set out to raise funds for the Tusk Trust, a
charity organisation that focuses on conservation in ,
but Nicole admits to be being a bit scared of being left behind. “Before the
race I asked, ‘The route is just full of buck, right?’ It wasn’t! While we were
running, there were helicopters and rangers to make sure the route was clear of
horns and teeth!”

So
far, Nicole’s efforts have raised over R500 000. “I don’t preach on radio about
it, but I think everyone should give back in some way. A lot of people feel for
rhinos, but do they do anything about it? If you feel strongly about something,
I say do something about it.”

Visit
www.tusk.org for more information on the Tusk Trust initiative and follow
Nicole at www.facebook.com/NicoledaSilvaPage or Twitter: @ThatNicole.